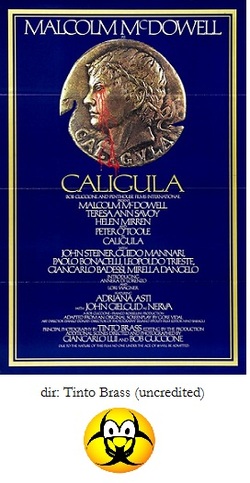 In the history of film, there have been bad ideas and there have been BAD ideas. The film that begs the question, "What in the hell were they thinking?" the most has to be the Roman Empire fiasco "Caligula", and that does count the singing paperboys of Newsies and Laurence Olivier being cast as General MacArthur in Inchon.

"Penthouse" magazine publisher Bob Guccione chunked down almost $20 million to bring his "vision" of Ancient Rome to the screen (and this was quite a bit of cash in 1980). This should have been an altogether obvious bad sign to all involved. But somehow Bob snagged Gore Vidal to write the screenplay and was able to woo big talent like Malcolm McDowell, John Gielgud, Peter O'Toole, and Helen Mirren to round out his cast.

McDowell plays the Emperor Caligula who was infamous for his powermad reign. And, basically, the film is a chronicle of his insane rule. There's no real plot to speak of, just a series of disgusting vignettes to drive the point obvious point home that he was a lunatic. What distinguishes Caligula from being a run-of-the-mill bad epic, and makes it sheer bad movie nirvana, is the mind-boggling amounts of sex and gore.

We've all seen our share of sex and violence in films but Caligula really takes the cake. The gore quotient is real high, and it's not even fun gore. It's the torturous, nauseating kind of violence. Like what you ask? Well, let's see. At one point Caligula ties off a soldier's urinary tract, forces him to drink gallons of wine until his stomach distends and then runs him through with a sword. He orders another man to be castrated, and the genitals are then fed to dogs (in loving close up). There is a bloody birth scene. More beheadings and throat slashings than I can count. And even a small child's head is smashed on some stone steps. Yuck.  And the sex? Not just your ordinary soft-core humping. No no no. We're talking full on pornographic sex. Of every persuasion. In detail and close-up. At first, I'll admit, it was kind of a cheap thrill. But after endless scenes of oral sex, rape, lesbianism, incest and even necrophilia (don't ask) it just really wears you down.

McDowell is very over the top in his performance, but with a character as perverse and evil as Caligula, who could blame him? Gielgud (Nerva) and O'Toole (Tiberius) are thankfully brief, being knocked off early, but that means a lot of really bad foreign performers hog much of the screen time. The biggest offender is Teresa Ann Savoy as Drusilla, Caligula's sister. She can't even play dead very convincingly, which in this film also means she will be naked so the camera to linger on her crotch.

At a mind-numbing 155 min, Caligula is, admittedly, easy to sit through, because you will be in awe, wondering what in the hell will be on the screen next. But as competent filmmaking, it is just a big piece of excrement. What were they thinking, indeed. Is it any wonder that writer Vidal, and director Tinto Brass (who?) both had their names removed from the credits?