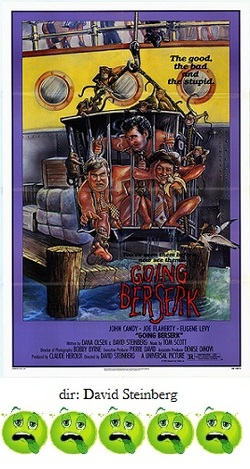 One of the great questions in bad cinema would be: How do otherwise talented and intelligent performers find themselves in a project that is so obviously terrible?  Could they not take one look at the script and smell the aroma of suck wafting off the pages?  Somehow John Candy, Eugene Levy and Joe Flaherty all found something worthwhile about the dismal and sloppy Going Berserk, but I can't begin to guess what that might've been.

Usually, this would be where I'd describe the plot; however, the plot of Going Berserk doesn't even kick in until its final third.  Candy and Flaherty play partners in a limo driving company with Candy moonlighting sometimes as a drummer.  Anyway, he's about to be married to Alley Mills, the pretty daughter of a powerful U.S. Senator.  The movie does nothing to convince us as to how a schlub loser like Candy could be involved with Mills (although as written, Mills's character has less than one dimension).

For most of the movie's running time we are treated to an endless stream of barely related scenes that have nothing to do with anything.  Mostly there's just a series of fat jokes aimed at Candy, such as the fact that during a lunch at the Senator's home, the dining room chair collapses underneath Candy's bulk.  Funny, right?  There is only one half-hearted chuckle throughout its entirety and that involves Candy being handcuffed to Ernie Hudson (don't ask) who dies while having sex with his girlfriend, so Candy must lug Hudson's corpse around and try to pass him off as still being alive.  Why I chuckled at this is because I could easily visualize the creators of the 1989 movie Weekend at Bernie's seeing these scenes and deciding to create an entire film (and a sequel!) around them.

The plot finally gets going when Candy is abducted and brainwashed by Richard Libertini and Dixie Carter, leaders of a religious cult of aerobicizers (really), to assassinate his future father-in-law who is prosecuting them for fraud.  This doesn't work out too well because the brainwashing only seems to cause Candy to run around and spew obscenities like a hyperactive Tourette's victim.

The worst scenes in Going Berserk (which is packed with bad scenes already) definitely are the bookends where Candy is telling us the story of the movie while in Africa.  We get the opening moment with Candy sitting on a throne and being carried along by a group of African men who, at film's end, break out into a performance of "Blue Moon."  These scenes come off as kind of sleazy and more than a little racist.  And don't get me started on the ghastly Going Berserk theme song.

What about the junky Going Berserk seemed to appeal to all of these people?  I haven't a clue.  It only succeeds at being a kind of intelligence vacuum.