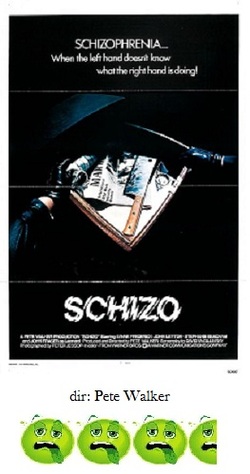 The British chiller, Schizo, has quite a good reputation for being a bloody and innovative horror classic, but I'm totally mystified as to why.  It's badly acted, sloppily written with an agonizingly slow pace all leading up to a twist ending you can see coming from miles away.

The movie gets off to a poor start with a pre-opening credit voiceover erroneously defining schizophrenia as multiple-personality disorder.  The plot begins with a middle-aged man, Jack Watson, reading in the newspaper about the impending wedding of figure skater Lynne Frederick and then getting all bug-eyed.  Next he goes into his room to pack a suitcase with all of the usual travel essentials, you know, socks, underwear, butcher knife, etc.

For the rest of Schizo, we just follow Frederick as she hears things, sees shadows and essentially begins losing her mind from fright as Watson stalks her and begins a killing spree.  Who is this guy?  Well, he is Frederick's stepfather who was imprisoned for knifing her mother when Frederick was a little girl, and afterwards Frederick changed her name, and now it seems that Watson wants to finish the job.

All of this could have been made into something memorable were it not for the fact that Frederick is a pretty bad actress and it takes nearly half of the film's running time to even get going, and even then it feels like it takes forever.  How many times do we have to watch Frederick freak out over every little noise she hears only to find out it's the wind, the housekeeper, a friend, etc. before it gets monotonous and old.  Yes, once in a while Watson does manage to off one of the characters, the scenes of which provide the only bit of excitement or interest.  But those moments are canceled out with fairly ridiculous scenes, such as the worst which involves Frederick's visit to a very cheesy psychic who is bludgeoned by a hammer later that night.

As you can probably guess, we have our final battle between Frederick and Watson and secrets and revelations are revealed, and unless you've been living under a rock and hadn't seen a movie in the past twenty or thirty years, you might actually be surprised by the ending.  Needless to say I had it all figured out about 15 minutes in, and I'm pretty confident you will too.

Maybe back in 1976 (or 1978 in the United States), there was something interesting and shocking in Schizo, but I doubt it.  It's hopelessly dated, hokey, unsurprising and, the biggest problem of all, it's not scary.  Some may still appreciate it, but I think time has not been very kind to it.