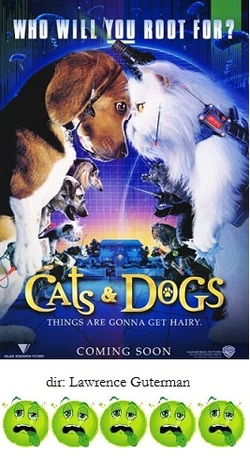 Whodathunkit? After suffering though Freddy Got Fingered, I popped in Cats & Dogs expecting to be, if not thoroughly delighted, at least somewhat bemused with childhood whimsy. What I didn't expect, was a nearly unwatchable and totally insipid insult to the intelligence. I got so absolutely disgusted with Cats & Dogs that I turned it off and didn't even bother finishing it. Yup, it's that wretched.

Now, some people will claim that I'm biased, because, after all, Cats & Dogs is a children's movie, and I am not a child. That is a bogus argument. Truly great children's movies can transcend that age barrier. Some of the most beloved films of all time are children's movies, from The Wizard of Oz to Willy Wonka and the Chocolate Factory to The Lion King and on up to other modern classics like Chicken Run, Babe and Shrek. The state of a lot of children's movies these days is actually very depressing, because the more classy and intelligent the movie is the less likely parents will actually take their kids to see it. Why go see truly great children's fare like The Indian in the Cupboard, A Little Princess or The Secret Garden (expensive box-office flops all) when you can go see steaming piles of brain-numbing crap like Pokemon, See Spot Run, Dr. Dolittle, Home Alone or, yes, Cats & Dogs.

The blame for Cats & Dogs's failure sits squarely on the shoulders of debut screenwriters John Requa and Glenn Ficarra. Obviously they pitched their idea to a studio with: "It's a kid's movie about a war between cats and dogs! We'll have celebrity voices! And use the same kind of talking animal effects like Babe! The script will write itself! It'll be a smash!" Anyway, all the money was spent on the effects and the script was written on autopilot.

Cats & Dogs is, indeed, about a war between cats and dogs. Why? Well, a hapless doctor (a slumming Jeff Goldblum) is developing a cure for dog/human allergies, which will tip the scales in favor of dogs. And the cats, well, they want to stop it and take over the world..or something.  Basically, the film is just one endless series of cat vs. dog mini-altercations. You see, it's supposed to be a Mission: Impossible kind of spoof, what with the animals acting as secret agents and spies with top secret control panels hidden in doghouses and kitty assassins and such.

There are just too many problems with the whole premise. There is just enough gadgetry and 007-style references to confuse younger audiences, but not enough, not NEARLY enough, cohesion to the story to make older audiences give a crap about how it'll turn out. Characters come and go at random, and it's never really explained exactly how the dogs and cats actually acquired, let alone, are able to do such things as, access computers, drive trucks, fly planes etc. It's just a given I guess.

Aside from the stupifyingly half-baked plot, I just wonder why the filmmakers aimed so LOW in the humor department. If you aren't going to bother taking the story seriously, at least make it funny, and maybe audiences won't realize there isn't one. But no. The comedy here is pitched right at the 6 year-olds in the audience. No one over the age of 8 or 9 could possibly find one laugh anywhere within its 89 minute running time. There are more clumsily handled slapstick, fart jokes, dog-crap jokes and groan-inducing puns than any intelligent person can possibly stand.

The celebrity voice performances for most of the animals are pretty bland and uninspired. The only one able to rise above this drivel is Sean Hayes (Jack on "Will & Grace") who provides the voice for the lead bad cat, Mr. Tinkles. He is somewhat entertaining, but then again, the villain usually is. Others include Tobey Maguire, Alec Baldwin, Susan Sarandon, Jon Lovitz and Charleton Heston, all to no benefit.

Also, being a "cat person" myself, I was slightly offended at how anti-cat the movie is. Dogs are the heroes, cats are the evil villains. Period.  Whatever.