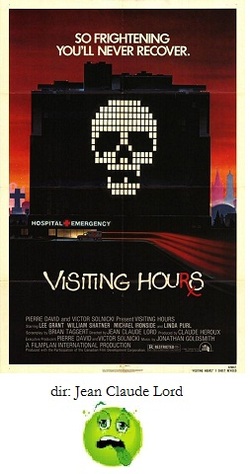 How Oscar-winner Lee Grant got sucked into this flick is the real mystery. After embarassing herself with her screen-chewing in Airport '77, I suppose she wanted to play something more subdued. In Visiting Hours, Grant is a TV talk show host whose topics are about violence against women. Because of this pro-feminist slant she evokes the ire from TV viewer Michael Ironside, who, after a particularly volatile show, tracks Grant to her house and attacks her.

This low energy opener sets the basic tone for the rest of the film. Grant walks around the house for a long while before finally noticing that her housekeeper has been hacked to death; and when she finally runs into her attacker, Ironside, he jumps out at her with a butcher knife while wearing every necklace and earring she owns. I guess it's just to show how crazy he really is.

Anyway, she escapes with the help of the handy dumb-waiter and is rescued by the cops. And so goes the rest of the film, with Grant laid up in the hospital (with nothing more than a slightly slashed hand mind you) for days, while knowing, KNOWING mind you, that her attacker will find her. So now we have fun with "Let's stalk the candy-stripers".

For some reason we get a unnecessary subplot involving single-mom nurse Linda Purl as she makes her rounds and proves what a self-reliant gal she is, only to have Ironside follow her home and drive a knife into her guts. The lengthy scene with Purl, bleeding and whimpering while Ironside stands over her watching is particularly misogynistic and uncomfortable. That's not to mention the scene involving Ironside bringing a hooker to his apartment so he can tell her what trash she is before beating her to a pulp.  Eventually, Grant and Ironside duke it out in a grand finale and she kills him, a stand-up move for independent women everywhere.

I suppose the filmmakers behind "Visiting Hours" thought they were providing their dreary little slasher pic with a feminist edge; but, sadly, the opposite effect is true. Rarely has violence towards women been taken to such a degree of glee as this one.  I didn't even mention the blink-and-you'll-miss-it pointless cameo of William Shatner. Or the laughable plot device of having Ironside wear a tiny bell around his neck so it can "ding" wherever he goes which, of course,  signals Grant of his whereabouts, oh, every five seconds or so.

It's impossibly slow flicks like Visiting Hours that make such over-the-top Charles Bronson nonsense seem not so bad by comparion.