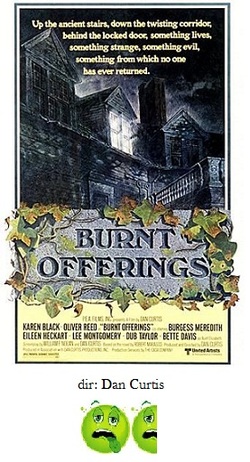 Now, I'm a big fan of haunted house and ghost stories, sadly though, most films of this genre are not very good. Despite the opinion of most people I really do like The Amityville Horror.  There are those who complain that it is boring and nothing happens; however, compared to Burnt Offerings, it may as well have been directed by Michael Bay.

Burnt Offerings tells the tale of a family who rent a large house in the middle of nowhere and are immediately beseiged by the usual strange goings-on. At the start of this flick, the elderly brother and sister who own the house (Burgess Meredith and Eileen Heckart) rent out the house to Oliver Reed and Karen Black. The conditions for rent include general upkeep and the caring for their own, very elderly mother, Mrs. Alladyce, who lives upstairs. Meredith and Heckart act so odd, rent the house for next to nothing, and only demand that the new tenants "love the house as much as we do."  Any sane person would have warning lights going off in their head. But not Reed and Black; they cheerfully accept, and proceed to move in with their 12-year old son, Lee Montgomery and Bette Davis as Reed's aunt.

I would love to say that lots of scary and creepy things start happening; however, such is not the case. Burnt Offerings gives new meaning to the word "subtle". It takes over an hour before things really get going.  Reed begins to act a little strange, Black also seems obsessed by a music-box and the caring of Mrs. Alladyce, whom we never see, Montgomery almost dies from a gas leak and Bette Davis becomes sick. Oooooh, scary.

The performances, on the other hand, are scary. Karen Black (a far cry from her great work in Five Easy Pieces and The Day of the Locust) is bland and shows little to no personality. Oliver Reed (a far cry from his nude wrestling match in Women in Love, which doesn't say much about his acting ability) shows an emotional range from A (flat and dull) to B (shaking hysteria and screen chewing). Only Bette Davis gives a worthwhile performance and it is actually a very good one, too bad she's knocked off early by the ghost of Reed's dead mother's hearse driver who hurls a coffin at her (don't ask, I really can't explain it better than that).

So much of nothing happens in this horror opus, that everything is saved for the grand finale, where Black seems possessed by the ghost of Mrs. Alladyce, Reed is hurled through a window and lands on the car, and young David is crushed by a collapsing chimney.  All of this may have worked if it weren't so confused and would at least declare to the audience what exactly is going on. Is the house haunted? Or is the house itself possessed (the house sheds shingles and boards making itself new again)? Or is Mrs.Alladyce haunting the place? The last shots of the film cause even more problems when some whispered conspiracy is heard from Meredith and Heckart and photos of Reed, Davis and Montgomery are shown. What in the hell does it all mean? I haven't a clue.

The mood of Burnt Offerings does offer some good creepy atmosphere, but that's about it. It's just too ambiguous for its own good.