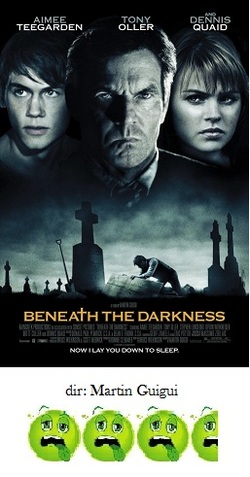 Beneath the Darkness is a limp and uninspired thriller that goes nowhere and has nothing to offer.  You know a film is a dog when the only other country that felt it deserved a proper theatrical release was Kuwait.

The film stars a scenery chewing Dennis Quaid as a small-town mortician with a seriously twisted side.  In the opening scene he forces a man into a coffin and buries him alive in the cemetery plot that once held Quaid's dead wife.  Jump ahead many months later and a group of four boring teens decide to check out the rumors that Quaid's house is haunted.  For whatever reason, when the teens spy on the house and see the shadow behind the curtain of Quaid dancing with a woman they automatically assume they are seeing ghosts.

So anyway, these genuises want proof there is a ghost and break into Quaid's house.  Yes, the woman Quaid was dancing with is the corpse of his dead wife (looking amazingly fresh for a body nearly half a year dead) and, yes, Quaid catches them and kills one of the them, but when they tell the authorities, no one believes them and so it is up to them to prove Quaid is a nutjob.

All of which leads to the predictable finale at the cemetery.  The girl teen, Aimee Teegarden, puts on the dead wife's dress which, I guess, confuses Quaid long enough to be defeated.  The final scene shows a bellowing Quaid in a jail cell wearing a straight-jacket, that ends with a thoroughly dumb line of dialogue directed right to the camera.  It's one of those 'cool' touches a director throws in to make it all seem that much more, I dunno, meta or something.

Beneath the Darkness is just disposable and useless.  There isn't anything here that can't be predicted by even the most clueless movie-goer.  It just goes through the motions, ticking away the familiar plot points one by one.  Those waiting for a surprise or two will be left wanting.  I guess they don't get much of this sort of thing in Kuwait, or it tells us something about their taste in movies that is just a little bit depressing.