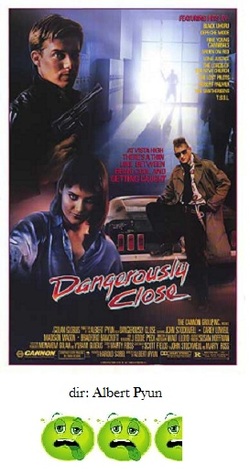 The cheesy and dishonest high school thriller Dangerously Close represents the very worst elements of the 1980s.  It wants to be slick, cool and trendy while still delivering a moral "message" it hasn't earned the right to deliver.

Dangerously Close takes place at an upscale high school that has recently opened up a Magnet program that has allowed low-income and minority students to attend.  However, a group of elite students feel compelled to combat what they see as "negative" influences by forming a group called the Sentinels.  The Sentinels, during the day, clean up litter and graffiti, but at night they target a "bad element" student by terrorizing them with a "hunt;" the student is chased through the woods by Sentinels dressed all in black.  One night, the hunt goes too far and a student is killed.

Our main characters are John Stockwell, the head of the Sentinels, and J. Eddie Peck, the editor of the school paper from whom Stockwell is trying to gain some good publicity.  Peck is snowed for a while until his own best friend, the thoroughly obnoxious Bradford Bancroft, disappears.

All of this sounds like it could make for a terrific mystery/thriller, unfortunately it becomes clear that director Pyun and the script, co-written by Stockwell, have absolutely no grasp on how to give us characters we are interested in, a story that is gripping or believable dialogue.  All of the characters are one-dimensional, the dialogue is flat and empty and it all plods along at a snail's pace.  The only real energy has been put into the movie's look: most scenes are filmed with misty backlighting while choice 80s tunes blare on the soundtrack.  Logic and coherence are also lacking as Peck, along with Stockwell's girlfriend Carey Lowell, investigate the Sentinels and become privy to clues that they really shouldn't understand as being clues since the script hasn't bothered to develop them; they just "know" things via osmosis, I suppose.  Even beyond this, there are other bizarre logical errors throughout that will have you shaking your head.

If these were the only problems on hand, Dangerously Close would be seen as just a glossy and forgettably bad movie.  What puts it into the next realm is the thoroughly ridiculous and offensive finale.  You see, it seems the Sentinels really didn't kill the student and it was someone else entirely, and then the Sentinels all get a sudden dose of remorse as if they are completely blameless and all they really were doing was in good fun.  Yeah, terrorizing the non-wealthy and non-white students was perfectly okay.  No biggie.  Everything's cool.

Dangerously Close may have thought it was too cool for the room, but it only manages to bore and confuse the viewer while leaving him or her with a throughly sour taste in the mouth.