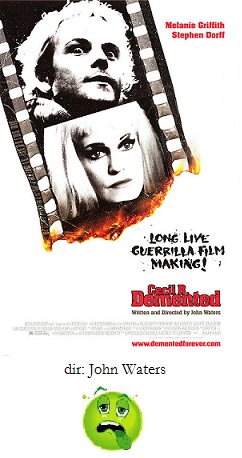 I'm still waffling on my opinion of John Waters's Cecil B. DeMented, and I'm not entirely sure why. Waters is one of the few filmmakers today that I actually get excited about, anticipating each new release like a junkie in need of a fix. I don't think this one works.

The plot of Cecil B. DeMented is inspired. Melanie Griffith is movie star Honey Whitlock, who has made a career making big studio films. While appearing in Baltimore for the premiere of her newest film she is kidnapped by a band of rogue, underground filmmakers and is absconded to their hideout where she is forced to act in their movie. Sadly, aside from this terrific setup, there is little else to offer, except repetition of the most annoying kind.

This is all provocative stuff; alas, Waters doesn't really seem to know where to go with it. The group occasionally storms a multiplex showing such things as Patch Adams: The Director's Cut, about which is said "Patch Adams doesn't deserve a director's cut. It was long enough!", then causing a riot and filming the turmoil.

And for the next hour or so, that's what happens in this movie, over and over and over again. The jabs at Hollywood are amusing, such as the raid on the set of Forrest Gump 2: Gump Again, starring Kevin Nealon. But those funny moments are few and far between. They film a successful raid, and run back to their hideout and keep repeating the same dialogue about "death to the Hollywood system" etc. A couple of ill-concieved rap musical numbers are thrown in for good measure, but the lame songs basically function as padding to an already thin story.

Anyway, the group finally storms a drive-in to show their completed masterwork, whereupon the cops arrive and there's a huge riot where most of our heroes are killed or arrested. Honey is carted off to jail, learning a valuable lesson.  I think she does, anyway. What's the point of all this? There isn't any as far as I can tell.

Some people will complain about this review because after all, John Waters's films are not to be taken seriously. I know that. And I don't. But with his films you expect a certain something. He is either completely twisted and outrageous (Pink Flamingos, Female Trouble) or slyly subversive (Serial Mom, Cry-Baby), but in either case, the humor is definitely there, as well as social commentary, and he usually has firm control over the material. In Cecil B. DeMented the humor is weak, and his themes this time are extremely shallow and half-baked.

Cecil B. DeMented is watchable, if nothing else, but it is no match for any of his other films. Except maybe for Mondo Trasho, but then again, that one was silent.