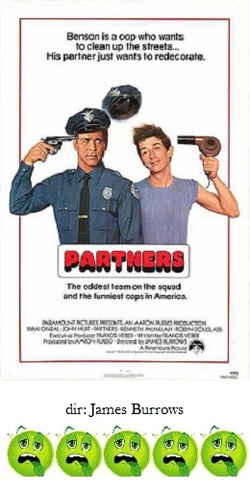 I'm not at all sure what the intentions were behind the making of Partners.  The plot can be summed up in one sentence: two FBI employees must team up to hunt for a killer and, oh yeah, one of them is gay.  Unfortunately, the makers of this movie pretty much relied on the concept to carry them through and didn't really bother to, you know, make it funny or interesting.  Partners just wallows in offensive stereotypes and then tries to be sincere at the end.

Ryan O'Neal is the very hetero FBI agent who is paired up with effeminate, gay John Hurt.  They must work together not only as a team, but they must go undercover as a gay couple in order to find a killer who shot a gay man.  The queasy attitude of the movie is summed up early on by their boss Kenneth McMillan when he instructs them to "eat in their restaurants, shop in their stores," as if gay and straight people don't ever frequent the same places.  It's also supposed to be an instance of high comedy when the FBI gives O'Neal and Hurt a car to drive in order to blend in.  What kind of car, you ask?  Why a pink VW Beetle, of course.

Okay, since none of the comedy works, what about the plot?  Forget about it.  It becomes clear that the screenplay doesn't much care about the murder mystery aspect and it's impossible to guess who the killer is.  In fact, the killer pops up about three minutes before the movie ends and has little to no connection to any of the events or people that we've encountered in the first 90.  The film ends with Hurt saving O'Neal's life and getting shot in the process, and while he lies bleeding, O'Neal gives one of the oddest passages of meant-to-be-touching dialogue ever with "C'mon now, hang in there.  I need you.  My apartment's a mess.  I'm sick and tired of eating alone in restaurants, I can't take it any more....what's for dinner?  Your lemon chicken?  Your lemon chicken is fantastic."  I guess this is where we're supposed to accept O'Neal's kindness despite the fact that he spent the whole movie calling Hurt and everyone else such lovely pet names as "queen", "screamer" and "faggot."

So, yeah, nothing works in Partners.  It's a comedy that isn't the least bit funny, a murder mystery that is half-assed at best, and it's all an exercise in hyprocrisy by wanting to mine the offensive stereotypes about gay men for humor while rising above it in its final, excruciating moments.  At least it's better than the dismal 2007 Adam Sandler/Kevin James so-called comedy I Now Pronounce You Chuck & Larry, but is that really a recommendation?