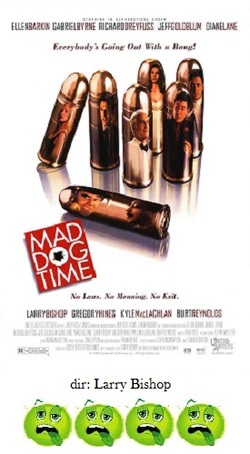 Mad Dog Time is yet another shameless attempt to capture the Tarantino post-Pulp Fiction magic, and it fails horribly.  It's all supposedly witty banter and posing and shootings with nothing else to offer.

For whatever reason, the movie begins by stating that what we are about to see takes place clear on the other side of the universe, on a different planet, or....it doesn't really matter.  Since everything takes place inside a night club filled with standard issue gangsters, it's not really clear why there is this pointless sci-fi angle.  Anyway, the mob boss, Vic (Richard Dreyfuss) is set to return to his mob family after a stint in a mental hospital, and all of the other mobsters spend the entire movie jockeying for a prime position, to either get on Vic's good side or take it all over for themselves.  Vic's main henchmen, Mick (Jeff Goldblum) and Nick (Larry Bishop) are also setting themselves up to be next in line.  Other actors that make brief appearances, until they're shot of course, include Gabriel Byrne, Ellen Barkin, Kyle McLachlan, Billy Idol, Diane Lane and many others.

All of this sounds like a story filled with action and intrigue, but Mad Dog Time is about as far removed from action and intrigue as a movie can possibly be.  Every scene involves a group of characters sitting around, exchanging the oh so witty banter and then one or more of them gets shot dead.  This movie must set some sort of record for the number of times guns get pulled out in a threatening manner.  Looking back on the number of characters killed and who they are, it's pretty clear it doesn't matter because no scene in Mad Dog Time depends on any of the scenes that preceeded them.  Anyone can die at any time for any reason and none of it makes any difference.

Larry Bishop's simple-minded screenplay also thinks it's just too, too funny that the three main characters, Vic, Mick and Nick, have names that rhyme, thus causing no end of consternation and confusion to the others.  No, this isn't funny in the slightest.  Barkin echoes our annoyance with the line, "I'm so sick of this Nick, Vic, Mick!  Yick. Yick. YICK!"  Clever writing, no?  The film ends with almost all of the cast shot dead and Vic still in power, and then we get another voice-over reiterating that the events we've just watched took place in another part of the universe.  And...?

And, nothing.  That's what Mad Dog Time leaves you with.  What all of these talented people saw in this project is the biggest conundrum of them all.  Nothing happens, no one says anything of any consequence, random people are shot, end of movie.  The fact that Larry Bishop actually got funding to direct other movies after Mad Dog Time is truly astounding.