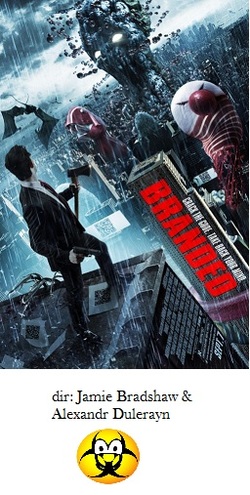 I guess I should give Branded points for its ambition, but lordy it's a nearly unwatchable mess of a movie.  Supposedly it's trying to be some sort of grand social commentary on the world's consumer culture, but whatever message was meant to be conveyed is incomprehensible.  If you took the intelligence and relevance out of Network, the ascerbic wit out of How to Get Ahead in Advertising and then filtered it through the John Cusack debacle War, Inc., the results would be something like this.

I'll do my best trying to explain all of this.  Set in Moscow, Branded stars Ed Stoppard as a young advertising executive and Leelee Sobieski as an American intern and they develop a reality show called "Extreme Cosmetica" which will take a fat woman and transform her through plastic surgery.  So far so good.  Well, the woman goes into a coma after the surgery and then there is rioting in the Moscow streets (really?).  Stoppard is jailed, and in order for him to be released, Sobieski flees back to the United States.

Jump ahead a few years and Sobieski returns and searches for Stoppard and finds him in his new life as a cattle shepherd.  Before returning to civilization, Stoppard builds an altar and sacrifices a red bull (!).  Buy doing this, which we find out is a Jewish spell (!!) that will allow Stoppard to "see" things other people can't (!!!).  So, what does he see?  Apparently, he can now see that adverstising has conjured up these weird creatures attached to everyones' heads (???), that resemble badly animated balloon animals.  You see, these creatures represent a desire for a certain product and will keep growing until that desire is satisfied.  Stoppard takes his new vision and gets all of these creatures to battle to the death which is such a success that all of the nations of the world band together to ban advertising everywhere.

Believe me when I say that I am making Branded sound a lot more lucid and understandable than it really is.  I was already bored, annoyed and incredulous even before those weird balloon creatures made their appearance (oh yeah, I forgot to mention the giant, pulsating egg that sits atop a skyscraper).  Maybe there is an inkling of direction somewhere in this travesty, but I'll be damned if I can find it.  The dreadful performances from Stoppard and the dependably bad Sobieski don't help matters, either.

There's more.  So much more.  On hand there are also Russian gangsters who terrorize vodka store vendors, an overacting Jeffrey Tambor as Sobieski's uncle, weird episodes where Max Von Sydow pops up from a secret "Polynesian island" to debate with fast food moguls about marketing hamburgers so the world can see that "fat is fabulous" and, finally, strange voice over narration from a constellation of stars in the sky (!?!?) that serves only to spackle over all of the gaping script problems (it doesn't work).  Any there is still more...

Branded is a fiasco.  It's a riot of nonsense masquerading as some clever statement about the digital age that collapses with a deafening thud.  For anyone wondering why Branded came and went so fast from theaters, here's your answer.