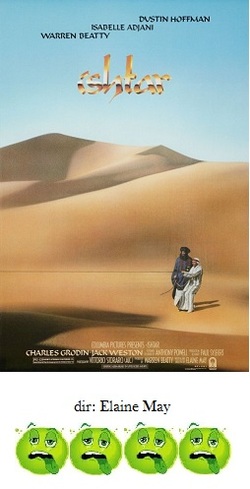 There are only a handful of movies whose very titles became synonymous with “critical and commercial disaster;” Heaven’s Gate would qualify as one, Howard the Duck would be another, and in 1987, the cinematic belly-flop known as Ishtar staked its claim as one of the worst films ever made.  Is Ishtar really that bad?  Well…

Even before Ishtar was released, the press surrounding its production troubles was already being heard around the world.  No one could figure out why director Elaine May was taking so long to put together what amounted to a pretty flimsy comedy, or why there were so many reshoots, or why the budget ballooned past $50 million.  None of that would’ve mattered had the final product been an enjoyable success; after all, 1982’s Tootsie also suffered from negative advanced buzz, but the film turned into a comedic masterpiece and all was forgiven.  Ishtar was nowhere near a masterpiece.  The reviews were savage and audiences avoided it like the plague.  It was a bomb that exploded so cataclysmically that May was never allowed back anywhere near the director’s chair.  Is Ishtar funny?  Nope.  Is it inventive?  Nope.  Is it at least pretty to look at?  Nope.  After viewing the film in its entirety, it’s hard to see where all of the money went, because it’s not on the screen.

Ishtar stars Dustin Hoffman and Warren Beatty was two unbelievably, untalented singer/songwriters, and the movie’s only real comedic inspiration comes from the moments when these two superstars write and/or sing.  This is amusing for maybe the first minute or two of the film’s running time, but it gets old real fast, and those scenes keep going on and on and on and on (although the song “I Left You Some Love in My Will” made me smile).  We get it.  They suck.  Now what?  Well, the twosome manages to land a gig in Morocco, but they get caught up in some boring political intrigue in the fictional border nation of Ishtar.  They may or may not be the two messengers of prophecy and there’s this missing map that resistance fighter Isabelle Adjani wants.  Charles Grodin is also on hand as an American government agent who also becomes involved.  I wish I could say more about this plot but the script is so vapid that all of this becomes both hard to follow and completely unimportant, usually both at the same time.