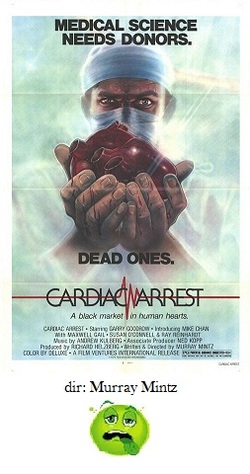 It's movies like Cardiac Arrest that probably cause the most disappointment for a viewer.  Here we have an interesting plot and a well-written and a well-acted leading role, but those good qualities end up not counting for much because of the listless direction and the cheapness of the way the movie looks and feels.  There was lots of potential, but it was never fully realized.

As Cardiac Arrest begins, we are dropped into San Francisco where a serial killer is on the loose.  This killer cuts out his victims' hearts, so the media unimaginatively calls them "The Missing Heart Murders."  Garry Goodrow plays the lead detective on the case who is pretty intelligent in a subtle way but he has a tendency to toss his cookies every time he encounters a corpse.  Goodrow does a great job making his character likable, personable and interesting, and this, above all else, makes Cardiac Arrest slightly better than so many cookie-cutter police procedurals that usually neglect giving the characters more than two dimensions.

The other plot thread involves a married couple, Dianne Gregory and Maxwell Gail, who've just been given the devastating news that Gregory has a degenerative heart condition and only has a limited time to live.  She can recover if a viable heart donor happens to kick off so she can get a transplant, but the odds of that happening are low and the list of those waiting for organs is long.  Just as their hopes are at their lowest, they receive a mysterious phone call from an unknown man who will guarantee them a heart for a large sum of cash.

All of this sounds as if it would make Cardiac Arrest a top-notch thriller, and it could have, but it just doesn't.  Most of the movie is filmed in a very flat and static way, giving every scene the barest minimum of energy to even imprint itself onto the celluloid.  I'm not the biggest fan of thrillers that overuse fist-fights and car chase scenes in lieu of plot exposition, but Cardiac Arrest could've used two or three of them to jolt the audience awake.

It's pretty clear that writer/director Murray Mintz's strength is in the writing, but the script could've used one more rewrite in order to tie together some very frustrating loose ends.  Even the most passive of movie-goers will likely guess who is the killer amongst the small handful of suspects.  There is a very lazy, sort-of throwaway explanation about how the killer would be able to take the hearts from the victims without causing them serious damage so that they could be transplanted in the patient, but there isn't any realistic explanation on how or when or where or by whom, such a precise (and back alley) surgery could ever be successfully done.  Such loopholes may have been easy to overlook if we were in the grips of a mercilessly paced and exciting film, but the slack pacing and cheap design give it all of the panache of slightly above-average television "Movie of the Week."

Cardiac Arrest isn't an awful film. It's just one that ends up letting everybody down.