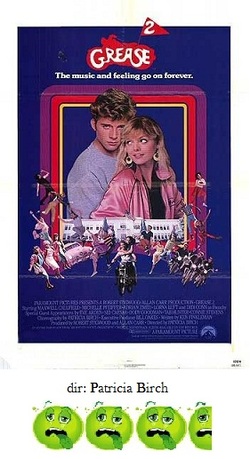 Director Patricia Birch has been nominated for a slew of Tony awards for her choreography.  With this background, one would think she'd have a pretty good understanding about what makes a successful musical.  Based on Grease 2, there's no evidence that she'd even seen a musical let alone choreographed one.

If the musical numbers aren't utilized properly, why include them?  If the songs don't actually provide plot information, backstory, transitions or character development, then they should be eliminated.  As far as Grease 2 goes, that would leave a 30 minute movie with one song.  And even then, the songs should at least be good, which they aren't.  And the cast should be able to both act and sing, which most of them can't.

Grease 2 takes place at Rydell High a few years after the events of the original Grease.  Yes, we still have the T-Birds and Pink Ladies, and a distaff romance between a foreign student and a cool kid (Maxwell Caulfield as the Olivia Newton-John character's cousin, and Michelle Pfeiffer as the head of the Pink Ladies), and lots of musical numbers.

The flimsy plot (although, to be fair, the plot to the original Grease wasn't exactly deep) involves Caulfield pining for Pfeiffer who only wants to date a biker, or as the only story-driven song says, a "Cool Rider."  In fact, Pfeiffer is such a fresh, sunny presence, it's no wonder she was able to survive this flop and have a successful film career.  Caulfield wasn't so lucky; although he was awfully pretty, he wasn't much of an actor and he was an absolutely atrocious singer, as his painful warbling in the movie's worst song, "Charades," shows.

And what about those songs?  They all range from awful to forgettable, but the biggest problem with them is that they are entirely extraneous.  They only serve to pad the running time and have no other function; take them out and nothing much in the story would change.   The characters go to a bowling alley and sing about bowling ("Score Tonight"); they have a science class and sing about "Reproduction"; two very minor characters sing "Do it For Our Contry" and so on and so forth.  It might've all been passable had the songs been any good, but mostly they are just too silly and sniggering in their sexual double-entendres to be taken seriously.  It almost comes across as a comedic spoof of Grease.

Justifiably, Grease 2 was a commercial and critical dud and Birch was sent back to Broadway.  At the very least, Grease 2 can be used as a blueprint on how not to create an original movie musical that piggy-backs on the success of another.