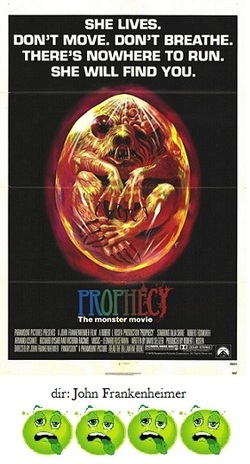 In the 1950s if you wanted to do a scary movie, it usually had to revolve around atomic energy or alien invasion, in the 1960s, the real terrors were either fascists, the government, or the hippie subculture, depending on your point of view. But in the 1970s, the enemy was usually a rich corporation which was polluting the environment. These movies could be summed up with a simple little fill-in-the-blank sentence: "A big ______ company pollutes the _________ which causes the ________ to attack man!".

There have been attack by giant rats (Food of the Gods), killer bees (The Swarm), wolves and snakes (Day of the Animals); and then there is Prophecy, which I affectionately describe as " the attack of the inside-out bears".

Prophecy was a big-budget studio attempt at environmental horror. They hired stars Robert Foxworth, Talia Shire, Armand Assante and Richard Dysart and signed on acclaimed director John Frankenheimer, and they still wound up with a pile of dull, laughable swill.

Foxworth stars as a bleeding-heart liberal doctor in New York who treats the poor, and Shire is his cellist wife. He gets assigned by the EPA to go to the Maine wilderness to help settle a dispute between the local Native Americans and a paper-mill company over land rights. Shire has recently found out she is pregnant, but has kept it a secret.

Anyway, once they get to Maine, it becomes apparent that all is not hunky-dory in the forest, or the nearby lakes for that matter. While fishing, Foxworth witnesses a gigantic salmon swallowing a duck, and sees what appears to be a tadpole the size of a human head.     After hearing stories from the local Native Americans (who are led in protesting the paper-mill by Assante who is unable to convince us of his Native American-ness, what with the barely concealed Spanish accent, but never mind)about a spirit-beast lurking in the woods, Foxworth puts two-and-two together to discern that the paper-mill is indeed responsible for polluting the lakes. So far, so good. But it is at this point that things begin to go downhill fast.

Foxworth tests the water and finds that it's polluted by methyl mercury, which in turn is causing the animals to become giant, deformed, and blood-thirsty. Dysart is the ruthless paper-mill manager who is unconvincing in explaining that mercury is safe.  Next, a father and his two children are massacred one night while camping by...something...in the forest. This scene is supposed to be terrifying but illicits peals of laughter. The young boy, you see, has zipped himself up completely inside his sleeping bag, with only his face poking out. The giant creature then attacks, so the boy screams and jumps up while still trapped inside the sleeping bag, hopping away to escape before a montrous paw smacks him, which causes him to sail through the air and crash against a rock. Of course the bag explodes showering the campsite with feathers.  But I digress.  The final half of the movie has our foursome, along with several extras whose only function is to be slaughtered, trapped in the woods and being attacked by the inside-out bear. The creature resembles a giant bear turned inside-out, all dripping slime, teeth and grotesque deformities. Will they survive?

Needless to say, there was potential here, but I think director John Frankenheimer just wasn't up to the task of making a horror-genre film. It's almost like he has purposely staged scenes, intended to be terrifying, as comedy. Also, the screenplay didn't help. What are we to make of the use of a deformed, baby inside-out bear? The baby bear is found squalling in a fishing net and Foxworth wants to keep the thing to use as proof of the pollution. So we get lots of shots of the baby bear and we have to hear its wet cries throughout (it looks and sounds like the baby-creature from David Lynch's Eraserhead, only not as scary). At one point, to save the baby, they actually hook it up to an I.V.(!?) Foxworth stupidly holds on to the thing even though this is the only reason the giant inside-out bear keeps chasing and eating them. He's just that stupid.

The effects leave a lot to be desired, as well. The bears are enshrouded by darkness and filmed through heavy foliage so as to mask how absolutely ridiculous and unconvincing they look.  Since the creature effects are the only reason one would want to watch Prophecy, even that miniscule interest is quashed.