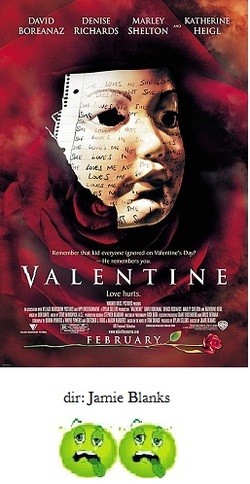 In the world of horror movies, especially regarding those known as slashers, there is such a thing as being too slick and polished.  Valentine is a large budget (comparatively speaking) slasher movie that is so glossy and "professional" that it barely has a pulse.

The plot of Valentine is right out of the slasher-cliche handbook.  At a middle school Valentine's Day dance, the nerdy geek known as Jeremy Melton, asks several girls to dance.  Naturally, they blow him off and he winds up getting humilated by the school bullies.  Yes, this event comes back to haunt everyone involved.  Jump to the present and these girls, now grown up to be Marley Shelton, Denise Richards, Jessica Capshaw, Jessica Cauffiel and Katherine Heigl.  I only mention their names because, all put together, they barely make up one personality.  David Boreanaz is also on hand as the typical romantic-interest, potential suspect/red herring.  Anyway, the gals start getting stalked by a murderer wearing a Cupid mask, after receiving a threatening valentine, of course.  Who could the killer be?

There isn't anything inherently wrong with this plot, as overused as it is, but the delivery here by director Jamie Blanks (he directed the fun Urban Legend) is so antiseptic, as if everyone, including the killer, didn't want to get dirty.  Effective slasher movies need a bit of grit and grue to make the horror palpable, but instead Valentine wants big, ridiculously over-produced set-pieces that defy logic.  If you can master the logic of how Cauffiel can be stalked an murdered during a modern-art exhibit without anyone noticing or Richards being able to lock herself inside a hot tub and nearly avoid getting skewered with a giant drill (an homage to The Slumber Party Massacre, perhaps?), then maybe you will find lots to enjoy here.

So, yes, we finally whittle down the cast until the killer's identity is revealed even though it doesn't make a whole lot of sense.  Valentine then complicates matters by having one of those hoary, annoying non-ending endings where the killer's identity may not be who thought it was.  This may have worked except for the fact that the first one identified pretty much admits total guilt.  Is there one killer?  Two?  That telltale nosebleed the killer suffers from should've made all of the nonsense during the climax more understandable, not less.

Valentine was a critical disaster and a box-office disappointment and Blanks was exiled to movie jail ever since, only directing two movies since, the direct-to-DVD Storm Warning and Nature's Grave (a remake of the 1970s Australian eco-horror cult favorite Long Weekend, which wasn't half bad to tell the truth).  Maybe Valentine was intended to be a slasher movie for moviegoers who don't like slasher movies, for those that do, it is simply a piece of generic, studio junk.