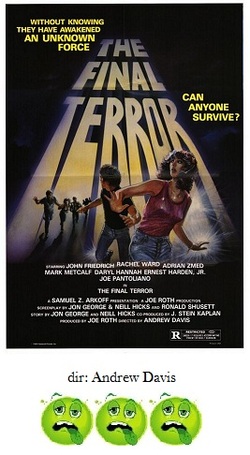 Although filmed in 1981, the dreary slasher The Final Terror collected dust on the shelf and only got a release thanks to the fact that it featured rising stars of the day Daryl Hannah (Blade Runner, Splash) , Rachel Ward (Against All Odds, Sharky's Machine) and Adrian Zmed (Grease 2, Bachelor Party), otherwise it would never have seen the light of day.

The Final Terror is just your basic slasher in the woods where a group of forest rangers and their girlfriends decide to go camping and meet up with a mad killer.  Ho hum.  There are a few differences to be sure, however they don't really make things any better.  Let's see...first, the body count (if you don't count the no name couple who die in the woods before the movie even starts), is a mind-boggling 3, and one of those kills happens off screen.

The slasher turns out to be a shambling mad-woman who's lived out in the woods for decades and it turns out that one of the rangers is this woman's son.  The script doesn't bother to exploit this particular plot thread, either, because it's pretty clear who it is and everyone on screen knows it so there's no suspense or surprise either on screen or in the audience.  The Final Terror is just an endless march through scene after scene of these campers stumbling in the dark, paddling down a river, calling each other's names and basically trying to pretend that there's something happening when there really isn't.

So, what about the cast?  Well, Hannah and Ward are given nothing to do except sit around, and although Zmed in the lead tries, he can't carry the movie all by himself.  The only real performance is given by future indy fave Joe Pantoliano (Bound, Memento) as the certifiably intense ranger that everyone rightly suspects has a secret agenda.  Of course, there are other semi-recognizable character actors on hand to fill out the rest of the cast (Mark Metcalf, Lewis Smith) but they have even less to do and fade into the background.

You might also recognize the name of the movie's director Andrew Davis.  He would later prove himself to be a capable talent by directing such popular critical and commercial hits as The Fugitive, Under Siege and Collateral Damage), but you would never have thought it possible based on The Final Terror.  Not only does nothing happen, but all that nothing happens in such muddy darkness that it hardly matters.

We all have to start somewhere.