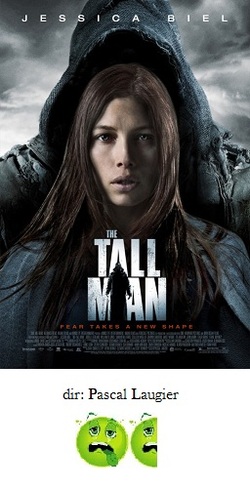 Those thinking The Tall Man may be another entry in the Phantasm film series, of which the major villain, played by Angus Scrimm, is known as 'The Tall Man,' will be sorely disappointed.  There are some good things in this particular The Tall Man, but by the end, all of those admirable qualities are undone in a flood of preposterousness.

The Tall Man takes place in the Northwestern town of Cold Rock, a place that is on life-support after the closing of the mines.  It's bad enough that the town and its citizens are suffocating under the weight of crushing poverty, but there have also been an alarming number of child disappearances.  These kids have vanished without leaving behind a shred of evidence; however, a couple of eyewitnesses have spotted a 'tall man' dressed in black lurking in the nearby woods.  Who or what is this menacing figure and what have become of the children?

These are the central questions posed in The Tall Man, and they are interesting and compelling ones.  Jessica Biel stars as a local nurse who works in the town's free clinic with a young son of her own, so it's really no surprise that, during one dark and stormy night, a darkly-clad figure steals away her own child and she gives chase.  And any more of the plot, I will not reveal, because it is here that the plot takes a surprising twist.

Now, the twist itself is pretty unexpected and it completely changes the direction of the film.  Unfortunately, once the twist is revealed, The Tall Man just falls apart.  Yes, we do find out the Tall Man's identity and what has become of the children of Cold Rock, but the motives and reasons  for it are all so totally unbelievable and ridiculous.  It's such a shame really, because writer/director Pascal Laugier does such an expert job at creating a real town with a realistic atmosphere, and Biel's performance is quite good.

Someone should've pointed out that the script just doesn't work before filming ever began.  The fact that The Tall Man barely got released anywhere in the United States is probably a telling  clue that the studios and distributors only discovered this fact after its completion.  In truth, though, many far worse movies get the nationwide, 3,000 screen treatment.

The Tall Man is a curious misfire.  It's worth a look for those who may desperately want to know the plot twists involved within; just be ready to be both perplexed and annoyed by how it all turns out.  You have been warned.