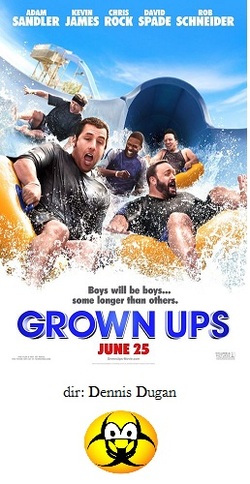 Sometimes a movie simply defeats me.  I can handle misguided.  I can handle inept.  I can even handle revolting (most of the time).  But when it comes to brain-dead comedies, my threshold for pain is low.  I readily admit that I couldn't finish watching the moronic can of cinematic Spam called Grown Ups.

Those who know me are very aware that Adam Sandler is my kryptonite.  I just can't stand him.  I am continuously mystified at his success in film.  My cineplex in Hell will be showing an endless loop of Happy Gilmore, The Waterboy, Big Daddy, I Now Pronounce You Chuck & Larry, and Little Nicky.  Seriously, I'd rather have a molten lead enema.  I guess what really pisses me off about Sandler is the fact that he can act if he wanted to, as he proved in his only tolerable outings, Punch-Drunk Love and Funny People, but he chooses not to.

Grown Ups is more of the idiotic same, only this time Sandler is joined by the other annoyances of Kevin James, David Spade, Chris Rock and  Rob Schneider, all of whom are relentless in their choices of junky film projects as he is.  The plot, or what there is of one, consists of all these man-children getting together with their families for a 4th of July reunion.  Granted, there may have been more to it than that, but I wasn't sticking around to find out.

So, why did I bail?  For the first 30 minutes of Grown Ups, there were exactly two jokes: one dealing with the high comedy surrounding an elderly woman's gout-ridden toe, the other situated around a woman who still breast-feeds her six year-old son.  Only these two jokes by themselves would've been bad enough, but Grown Ups (co-written by Sandler himself and Fred Wolf) repeats these two jokes over and over again within those 30 minutes.  It wasn't funny the first time, it wasn't funny the second time and, I'm sure, wasn't going to be funny however many times it would be told.  Oh yeah, and if kicks in the nads and other such overdone, tired pratfalls are your ideas of great comedy then have at it.

I only have so many brain cells to sacrifice in the name of bad cinema to bother martyring them on something like Grown Ups that has no hope of being anything other than the most useless kind of would-be entertainment than it is.  And guess what?  Grown Ups 2 will be gracing screens in 2013.  That may be the single most depressing piece of news I've heard all year.