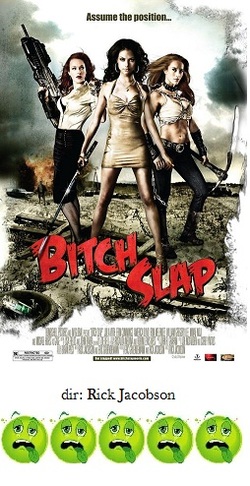 There is a quote by Joseph Conrad before the opening credits and a quote by Sun Tzu before the end credits roll.  These will be the only moments within the entirety of Bitch Slap that will engage any part of a healthy, functioning human brain.

Bitch Slap, at least, answers the question of what would happen if you ate a Russ Meyer T & A classic, such as Faster Pussycat! Kill! Kill!, blended it with a tired Quentin Tarantino rip-off, and sprinkled it with The Usual Suspects and then puked it all back up.  It's just flash and noise without substance.  It has nothing to say, but that doesn't stop it from saying it in the most obnoxious ways possible.

The movie stars Erin Cummings, Julia Voth and America Olivo as three chicks who spend the whole running time floundering around the desert searching for...well....it's hard to say; at various times the goal seems to be diamonds, or firearms, or samurai swords, but in reality it doesn't matter.  These three actresses were obviously hired for the way they wield big guns and even bigger breast implants, rather than for any acting talent.  Seriously, the only tension within the entire film comes with the speculation over the engineering specs of their push-up bras and halter tops.

We get lots of girl fights, explosions, gunplay, grinding speed metal music, and lesbian kissing.  The only bit of interest is trying to name all of the 'homages' stuffed into the screenplay:  there's an Asian chick wearing a private school uniform who has a deadly weapon on the end of a chain (Kill Bill Vol. 1), the mysterious identity of a legendary killer a la 'Keyser Soze' (The Usual Suspects) and other cribbed elements too numerous to mention.  Writer/Director Jacobson, who credits himself as 'Poet Laureate', is not only bereft of writing talent but he's also a crappy director.  No amount of slow motion effects, split screens, frantic editing choices, useless flashbacks or migraine-inducing sound designs (all of which Bitch Slap overuses to a punishing degree) can mask the fact that the movie is about absolutely nothing.

I know many will say that I'm taking Bitch Slap too seriously, that it's meant to be taken as a fast, silly, violent romp.  Well, all I can say is that watching this group of non-actors floundering around in the dirt for 105 minutes just wasn't any fun for me.  Much like all of the cleavage on display, this movie is just one, big tease that never gets to the nitty gritty or delivers on its promise.

Within the whole film, the only things I took away from Bitch Slap were a couple of interesting, if tasteless, insults, such as when Olivo calls Voth both an 'axe wound' and 'the Gland Canyon'.  It ain't much, but at least it's something.