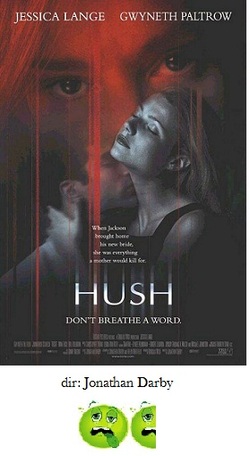 Here we have what can best be described as "step-mother from Hell". Hush makes the grave mistake of taking its story seriously. By now, this genre of movie is a huge cliche, and unless you are going to put a new spin on it, you have no hope of making it seem fresh. Writer-director Jonathan Darby's screenplay wants to be taken at face value as a thriller, but star Jessica Lange obviously knew that it was ripe for parody. Thus, Hush is a mash-up of mood and attitude.

The film begins with happy couple Gwenyth Paltrow and Johnathan Schaech going to visit Schaech's mother's horse farm in Virginia. Jessica Lange is the mother and plays it like Scarlett O'Hara or Blanche DuBois on some serious crack: a sinister lilting southern accent, a cigarette smoldering at all times, and an insane little light behind the eyes. Paltrow should have realized this dame was damaged goods and fled, but she stays, even when she suspects her diaphragm has been tampered with.

Anyway, the horse ranch, named Kilronan, is in dire financial straits, and Lange needs help. Schaech wants to sell, so he an Paltrow go back to New York. No sooner are they there then Paltrow realizes she is pregnant and is promptly mugged, sending them back to Kilronan to await the birth. Once there, Paltrow realizes what a manipulative b*tch Lange is, driving a wedge between her and her hubby. What she doesn't know is that Lange, in fact, wants the baby for herself as an heir, and that Paltrow is just an expendable womb.  That's basically the silly gist of Hush, but there are the usual other subplots like the "big secret" Schaech holds, that he was responsible for his father's death, and the elderly family member who knows the whole sordid history of Lange.

It is just all too silly. And strangely anemic too. Nothing really happens. Finally Lange, fearing Paltrow and Schaech will leave, uses a horse drug to induce labor in Paltrow, and attempts to off her with an overdose of morphine. Everything culiminates with the unsatisfying finale when Paltrow survives the attack, tells her hubby, reveals all of Lange's secrets, and then they leave. That's it. It's as if yeah, you tried to kill me, you tried to take away my baby, you lied and ruined your son's life by making him carry unnecessary guilt, and now I'm going to give you a stern talking to young lady!

Hush is just a yawner all around. Not exciting or outlandish enough to be entertaining, it's just an inconsequential and forgettable time-waster.