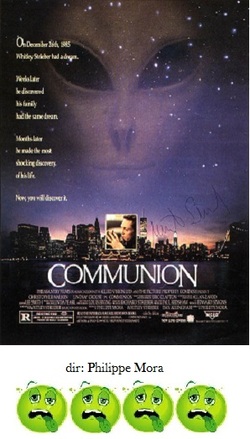 Can anyone tell me what this mess was about?  I know Communion is supposed to be the true accounts of author Whitley Streiber's claims to have been visited by and experimented on by extra-terrestrials, but regardless of whether or not you believe they really happened, what's on the screen is so loopy and confused it hardly matters.

Communion stars Christopher Walken as Streiber, and this casting choice is just the beginning of its problems.  Walken is an amazing and intense actor who flourishes when playing characters who are, to put it mildly, a little off-center.  As Streiber, from minute one, Walken acts so bizarre that making that jump to being nearly driven to a nervous breakdown is hardly seems to make much of a difference.

Anyway, Walken and wife Lindsay Crouse drive out from New York to their country lodge and then, one night, the building is bathed in an unearthly light and an alien appears to Walken and zaps him in the forehead with some sort of instrument.  Even though I say the alien zaps him, it's more like the hand holding the instrument stays still and Walken leans into it to make it appear like something's happening.  And, yes, it all gets stranger from there.

Walken begins having strange visions where people around him have the heads of insects, he has more experiences where a crowd of little blue men in capes periodically take him from his bedroom and give him rectal probes in an unearthly, metallic room surrounded by what looks like tin foil all slathered with steaming dry ice.  Much is made of the rectal probes.  He even ends up going to a group therapy session, headed by shrink Frances Sternhagen, where rectal probes are the hot topic of the day.

As if all of this weren't strange enough already, he has another experience where he is carried away by the blue creatures (he hardly seems to protest) into their ship, he teaches them to high-five, they all dance a mean samba and then he has a vision of himself as a magician all the while tacky, plastic-looking, big-eyed aliens sway in midair around them.  I could go on, but why bother?

The acting by all is histrionic, the special effects are horrendous, the script loses lucidity almost immediately, and when it's all over, you're left a bit stupified at how wrong-headed almost every decision made was, by the cast, the director, Philippe Mora (who did a much better job with The Beast Within with a smaller budget, but the less said about his The Howling II: Your Sister's a Werewolf, the better), and Whitley Streiber, who penned the screenplay for Communion from his own memoirs.

Whether you believe in alien abduction is irrelevant.  Many people, apparently, believed in this movie, and that's the scariest fact of all.