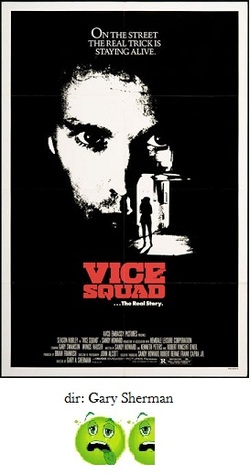 Vice Squad is a seedy, violent exploitation wallow masquerading as a gritty, 'you are there' depiction of the mean streets of Los Angeles.  What saves it from being a total slog through the sewer are good performances, a brisk pace, and a detestable villain.

The plot basically revolves around a trio of characters, first is Season Hubley who plays the cliched role of the dutiful single-mom by day and hardened streetwalker by night; Gary Swanson is the head of L.A.'s vice squad unit and Wings Hauser, in his star-making role, is Ramrod,  a particularly vile pimp.

The opening scenes of Vice Squad pretty much set the tone for what will follow.  A prostitute friend of Hubley's is hiding out in a motel room after being beaten by Hauser.  Hauser finds her, sweet-talks her into letting him into the room and then ties her to the bed and beats her to death with a coat-hanger.  Scenes like this, and there are many others, straddle a fine line between misogynistic voyeurism and gritty reality.  Sure, things like this do happen, but the way the film lingers just a wee bit too long on the brutality, it makes one feel kinda uncomfortable.

Anyway, the hooker dies and Hubley is coerced by Swanson into setting up Hauser for arrest.  It works, that is until Hauser escapes custody and spends the rest of the movie tracking down Hubley, beating up one woman after another, and also stabbing a black guy in the process.  Hubley is soon caught and Hauser straps her to a bed and beats her with his favorite coat-hanger until Swanson and the squad come in to save the day.  Hauser is shot dead and Hubley goes back home to her daughter to probably rethink her career trajectory.

The best things about Vice Squad are the performances by the entire cast, but especially Hubley and Hauser.  She's an appealing actress and is able to gain the audience's sympathy from the very first frame.  We do care about what happens to her and hate to see her in peril.  On the other side of the spectrum is Hauser.  His work here was so effective and scary he was pretty much typecast as villains or crazies for the rest of his career.  A mixed blessing, I'm sure, but in the pantheon of the greatest screen villains, his work as Ramrod ought to rank right up near the top of the list.

There are some good qualities about Vice Squad.  Watch it for the performances, but just close your eyes and ears during some of the excessive brutality and you'll be fine.