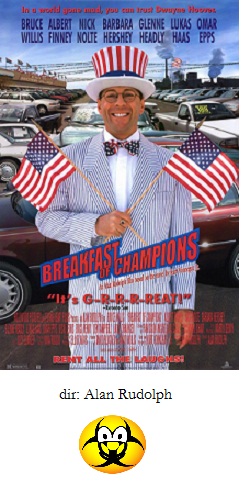 Of all the famous writers in the world whose work should be considered unfilmable, the novels of Kurt Vonnegut are probably the most unfilmable. But that hasn't stopped Hollywood from trying. There was moderate success with the adaptation of Slaughterhouse Five, but that was the exception and not the rule. Anyone who has actually sat through Slapstick (of Another Kind), which featured Jerry Lewis and Madeline Kahn as giant supra-intelligent alien twins with really big heads, knows what I'm saying. And now, here is the misbegotten film version of Breakfast of Champions.

You might ask yourself why an adaptation from a famed novel from a literary god, that was directed by indie maverick Alan Rudolph, and starred A-list actors like Bruce Willis, Nick Nolte and Albert Finney, was swept under the rug and was barely giving a theatrical release before being shunted down at the bottom of the discount bin. That's because it is beyond imagining how unbelievably godawful it is.

Since this movie makes absolutely no sense whatsoever I can't really go into detail about plot, I can only indicate the characters and some of their actions to indicate what this piece of garbage is about.  Well, Willis stars as Dwayne Hoover, a car salesman in the town of Midland City, who is somewhat of a local celebrity and always seems to be on the verge of a nervous breakdown. There is Nolte as Willis' friend and fellow salesman. His big secret? He likes to wear women's clothes. The sight of Nolte strutting through his house wearing a red silk teddy is enough to make you want to claw your eyes out. Barbara Hershey is Willis' wife who sits in a drugged state the entire length of the film. Finney is a sci-fi writer named Kilgore Trout, who must get to Midland City to attend "The 1st Annual Midland City Fine Arts Festival". Omar Epps is an ex-con named Wayne Hoobler. You see, since his name is so close to Dwayne Hoover, he feels it is his destiny to work at the same car lot, even going so far as to carry a newspaper ad of Willis in his wallet as inspiration and camps out at the lot until he can talk his way into getting a job. Also, there is Lukas Haas as Willis' son, Bunny, who is a gay lounge singer.

Anyway, during the course of the movie, Willis frantically tries to film a TV commercial to promote "Hawaiian Week" at the lot and periodically goes into his office to suck on the barrel of pistol. He wants to kill himself, see, but doesn't really have the nerve. Too bad for us.  So what we have here in this movie is a bunch of very strange characters who wander around spouting inane and unrelated dialogue. It's a lot of disjointed, free-form nonsense. No one makes any sense. Ever. They talk to each other in circles and surreal platitudes that it really gives you a migraine trying to understand what the hell is going on.

Director Alan Rudolph really botched this up. He makes matters more confusing by his use of music and special effects. You see, the soundtrack is this never-ending cocktail jazz that is constantly plinking and tinkling in the background of every scene. It is maddening. The special-effects are thrown in at random, without any purpose other that to muddle an already confusing film. Also, the camera is constantly swooshing, swinging, and tilting at every given opportunity, inducing nausea.

What does a suicidal car salesman, a transvestite, a basket case wife, a sci-fi writer, and ex-con, and a lounge singer have to do with "The 1st Annual Midland City Fine Arts Festival"? Who knows? Your guess is as good as mine.

Not since Hugo Pool has such a heaping pile of bizarre, pseudo-hip nonsense performed by an All-Star cast been foisted on the naive movie-going public. But in both cases, all parties involved pretended it never existed. I don't know about you, but I can't recall any television or magazine interviews with Willis, Rudolph, Nolte etc. promoting the release of Breakfast of Champions. It was obviously considered hush-hush. The thought process was "If we ignore it, maybe it'll go away". Thank God for home video and cable, right?

The only possible reason to see it is to check out how Nick Nolte looks in lingerie. But is that reason enough?