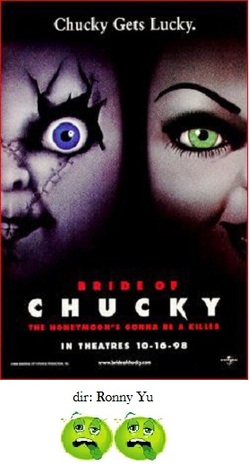 How could Bride of Chucky possibly be any good? Well, it can't...and it isn't. To be fair, it is quite a step up from the dismal Child's Play 2 and Child's Play 3 but, really, that isn't saying a whole lot.

By now, I think we are all familiar with this series of horror flicks about serial killer Charles Lee Ray and his adventures as an evil soul trapped in the body of a grotesque little doll. And in this fourth film of the series, our friend Chucky is repaired and reanimated by his long ago girlfriend Tiffany, played by loopy Jennifer Tilly, with the help of some sewing prowess and the self-help book "Voodoo For Dummies".

Anyway, the couple spar, and as an act of revenge for being locked in a playpen, Chucky dunks a television in Tiff's bathtub electrocuting her. With some quick thinking, he voodoos her soul into a doll as well.

Now, this opening is actually more promising than it sounds. The filmmakers put tongue firmly in cheek and develop some genuine humor, but alas everything goes quickly downhill from there. You see there is a teenage couple named Jesse and Jade who are tricked into driving the dolls to the gravesite of Charles Lee Ray. There's this rare amulet he was wearing when he died, see, and without that they can't get their souls out of the dolls and back into a human host....got that? Apparently, it's extremely easy to get into the doll, but such a bitch to get out.

While dimbulbs Jesse and Jade trek cross-country, various extraneous characters are bumped of with glee. Jack Tripper...er..I mean John Ritter gets a face-full of nails, and there is a throat slashing and death by falling shattered mirror. I'm not sure why we are supposed to care about Jesse and Jade at all; they both have the personality of a wet mop. I was hoping for quick grisly deaths for the both of them, but no. The only semi-intelligent, likable character is a gay friend of theirs but, of course, he is hit by a Mack truck late in the film and explodes into tasty chunks.

Anyway, all this nonsense leads to a showdown between our doll villains and our "heroes" at the gravesite of Ray. This would be all well and good except for that Tiffany turns on Chucky and tries to kill him for no apparent reason other than to stretch out the finale. But all is quickly forgotten and forgiven and the evil little dolls are destroyed. All is not lost.

If you didn't already guess, the ending has the pregnant (?) body of Tiffany giving birth to a hideous offspring, conveniently leaving the door open for the next, inevitable installment, Seed of Chucky (Shockingly enough, it's actually a lot better than this one).

All in all Bride of Chucky could have been so much worse, but really, why would anybody even bother.