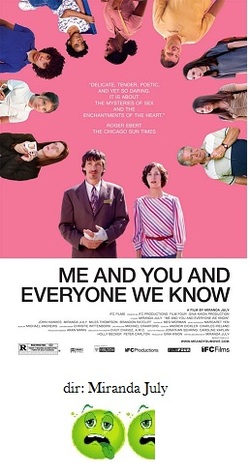 I suppose I can understand why many critics were falling over themselves to heap praise atop Me and You and Everyone We Know, the too-quirky-for-its-own-good feature film debut of performance artist Miranda July.  For me, this movie sailed way past quirky and landed firmly in the territory of grating and irritating.

Me and You and Everyone We Know follows a handful of individuals and shows us how their lives intersect in wannabe profound ways; think Crash without a social message where all of the characters talk at right angles to each other while barely registering any recongnizable emotion.  The main plotline surrounds the beginnings of a tentative romance between lonely shoe salesman John Hawkes and a weirdo performance artist, played by Miranda July herself.  There are other characters in the mix, such as Hawkes's two children, a lonely art gallery owner, and many others.

So, what do we discover?  We see Hawkes set his arm on fire, we see July turn into a disconcerting stalker who, justifiably, alarms Hawkes for much of the movie, we find out that the gallery owner is turned on my poo, we see that teenage girls still think in terms of needing a dowry, we learn that 'macaroni' just might be a magical word and, finally, we learn the source of the strange clanking noise the source of which Hawkes's two boys are obsessed over discovering.  This final revelation is played up as this movie's 'big reveal', but let's just say it is the very essence of the word 'underwhelming.'

Sure, I can see some people being won over by much of this nonsense, but what I can't understand is how no one ever seemed to notice that the acting by this cast, with the exception of Hawkes, is so dreadful.  Hawkes is the lone oasis of sanity and talent to be found anywhere in this movie.  July is her own worst enemy as she squeezes out so much 'goofy' into her performance that you have to wonder why Hawkes doesn't take out a strongly-worded restraining order against her.  If any normal person ran across this chick in real life, they would start backing up immediately, trying to get as far away from the crazy lady as is humanly possible.  The other actors, though, do their best impressions of rather uninteresting statues.  Calling these actors wooden, waxen, flat or lifeless is being very kind.

Something else you will probably notice is that July's character, who is an artist, remember?, isn't particularly talented.  Eventually, she does succeed in getting into the gallery, but her art itself is shrug-worthy.  All I can say is that it didn't give me much hope for the state of modern artistic talent in the United States.

Inexplicably, Me and You and Everyone We Know was an indy hit and July became a bit of a critical darling.  So, how did she follow up this success?  By waiting 6 years to direct a follow-up, a 2011 dud called The Future (still unseen by me and likely to remain so) that disappeared from the scene in record time.  She really should just go back to her day job.