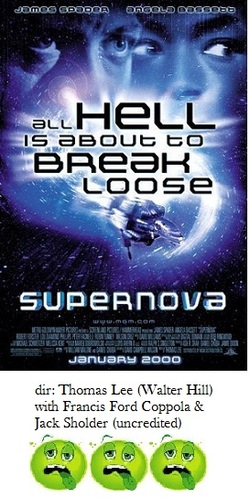 It would be really interesting for someone to go back and remake this movie using the original William Malone script.  When Supernova was originally slated to be made, there were many who were predicting it to be a 2001: A Space Odyssey for a new generation, an intelligent sci-fi film that was going to be epic in both scope and ideas.  Unfortunately, production problems, studio battles, script revisions, budget troubles and a revolving door of directors all conspired to turn what could've been something special, into something pedestrian and uninteresting.

Supernova is a very routine outer-space adventure about a medical rescue ship (members include Angela Bassett, James Spader, Robin Tunney, Lou Diamond Phillips, Robert Forster and Wilson Cruz) that answers the distress call of another, but they only find one soul survivor (Peter Facinelli) who boards along with a strange alien artifact.  Of course, we the audience fully expect an obligatory alien creature to be involved somewhere so the entire crew can get picked off one by one.  That doesn't happen.  What does happen is that the artifact gives Facinelli super-human strength and a really bad attitude and he picks the crew off one by one.  Supernova could've definitely used an alien.

The script is so garbled and stripped of coherence that it's never clearly stated what this artifact is, what it does, where it came from or why.  It just is.  There's some dialogue about how humanity could or should use this power, but it is less than helpful.  Every once in a while you can hear a line of dialogue or discern an idea within what's on screen that gives some inkling as to what Supernova might've been.  It's pretty clear that everything determined to be too ambitious, lofty or original was eaten away and eaten away until there was almost nothing left.  Walter Malone retained a 'story by' credit, but the screeplay is attributed to David Campbell Wilson.

The cast is simply set adrift, given next to nothing to do and it shows.  Bassett and Spader look so bored and over it they barely can contain their disdain for the situation they've found themselves in.  Only Facinelli performs with any energy, but then again, he's the only one given a second dimension however paper thin that dimension might be.

If you're wondering about the director, Thomas Lee, don't.  Thomas Lee is another one of those invented pseudonyms (like Alan Smithee) that is placed in the credits  because the director wanted to distance himself from the finished product.  In this case it was Walter Hill (The Warriors, 48 Hrs.).  In actuality, there are 3 other directors tied to this production:  the original director, Geoffrey Wright, walked off after a bitter script dispute, and both Jack Sholder and, shockingly, Francis Ford Coppola were brought in to salvage the footage after the studio took control away from Hill.  No one really came out ahead.

Supernova is a stupifying waste of time and money.  It's hard to believe nearly $100 million was spent on a film that could've easily been made for less than one percent of that by reusing old Lost in Space sets.  No one would've noticed the difference.