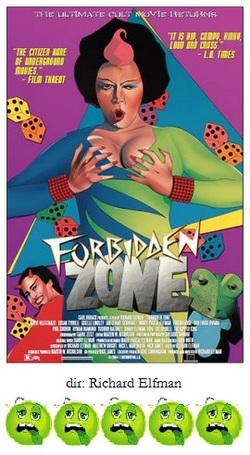 Forbidden Zone is the creative effort from those nutty Elfmans. Written and directed by Richard Elfman, starring himself, his brother, the musician Danny Elfman (from the band Oingo Boingo who currently is one of the top Hollywood talents for film scores, and also did the score here) and relative Marie-Pascale Elfman. What can you say about a flick that's basically a willfully annoying brain-bender, with odd musical numbers, cheesy cardboard sets, Monty Python-esque animation, while starring Herve Villechaize and Susan Tyrell?

The story, as best as I can follow, deals with a family whose house is the portal to the Forbidden Zone, an underworld ruled by the lusty King Fausto (Villechaize) and the evil Queen Doris (Tyrell). The daughter, Frenchy (Marie-Pascale Elfman with a hideous French accent, hence the name), gets trapped in the Zone and it's up to her family and her best friend Squeezit (played by Matthew Bright who went on to write and direct the awesome Reese Witherspoon, red-riding hood parable, Freeway) to rescue her from the Queen's evil clutches.

So much for plot.

The movie is less about story than it is about grotesque weirdness and wackiness. You see, Sqeezit is nicknamed "Chicken Boy" because he walks like a chicken and flaps his arms like wings, and he also likes to hide in garbage cans, Bright also plays Renee, Squeezit's twin sister who is also part of King Fausto's harem. Let's see, there is also a musical number devoted to the alphabet that I recall was culled from an old Three Stooges episode. The entranceway to the Forbidden Zone features badly animated intestines which the unfortunates are sucked through and are spit out from the anus of a giant pair of butt-cheeks. Queen Doris does a bizarre musical number called "I was Born from a Witch's Egg", there are two guys who show up wearing nothing but jock-straps and burp along to the musical score, the female prisoners of the Zone run around topless wearing a Mickey Mouse ears and are whipped by a man with a giant frog's head, there are three chained obese women whose only purpose is to stand around wearing bathing suits and eat bananas. And that's not even going into Danny Elfman's turn as Satan himself. Somebody certainly sold their soul for this mess.

Sound interesting? The only real saving grace is that the whole movie is in black and white.  The sheer balls-out weirdness of Forbidden Zone does earn it some credit for daring, I guess, but God Almighty, it certainly felt like cork-screws to the temples.  If you can sit through Forbidden Zone without losing several sanity points, then you are a stronger person than me.