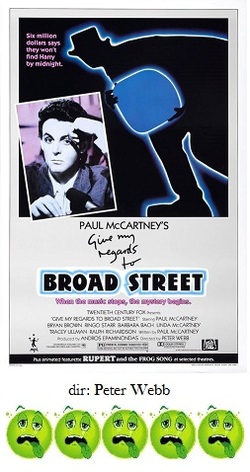 There may be worse music-themed movies out there than Give My Regards to Broad Street, but few are as empty and pointless.  This marks the sole feature writing credit of former Beatle Paul McCartney, and it should stay that way.

Plot?  What plot?  Paul plays himself, naturally, and the conflict arises when the master tapes for his new album have vanished along with Ian Hastings, who was in charge of delivering them.  Bryan Brown is on hand to scowl, playing the producer?  Label rep?  Studio exec?  Who knows?  Not that it makes a whit of difference.  Anyway, it's up to McCartney to find the missing tapes by midnight or else....something bad happens.  I'm not sure exactly.  Other suits appear to be the villains and there is something about a deadline that is never clearly articulated where these villains will take over...somehow.  No matter.  Ringo Starr, Barbara Bach, Ralph Richardson, Tracey Ullman and Linda McCartney pop in and out, occasionally, but without any direction or apparent purpose.

Give My Regards to Broad Street simply follows McCartney around, giving us a glimpse into the life of a rock god.  The movie follows the pattern of McCartney doing a little searching to find Hastings, and then he pauses for a musical number in a rehearsal hall, recording studio or music video shoot, and then back to some searching.  Considering how dire the consequences of not finding the tapes are, he doesn't act all that concerned.

We know that McCartney will find Hastings and the tapes.  What we don't know is that Hastings basically told everyone where he was going and it takes the entire length of the movie for McCartney to remember that helpful bit of info.  Where are they found?  Why, on Broad Street, silly!  Just as we are about to beat our heads on a wall at this resolution, we come to find out that the whole movie was a dream, anyway.

Since Give My Regards to Broad Street is moronic on a story level, the only thing it has to offer are the many (many, many) long (long, long, looooooooong) musical numbers; and despite the music being a bunch of decent recordings of Beatles and Wings tunes, they are painful to sit through because they are just so endless and obviously only serve as inert padding.   The ten minute long version of 'Eleanor Rigby' while McCartney imagines he and his friends having a picnic while dressed up in Dickensian garb is particularly insufferable.

I would normally advise to skip the movie and buy a CD of the soundtrack, but in the case of Give My Regards to Broad Street, you just might swear off listening to any of the Fab Four's music ever again.  It does a pretty decent job of soiling the reputations of so many.