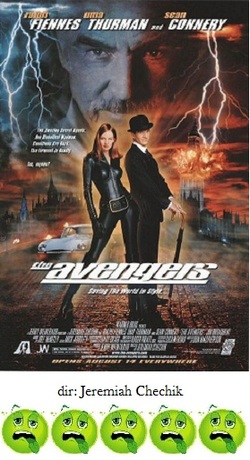 There is something so disappointing about watching a movie that starts off pretty good and then quickly disintegrates right before your eyes. It's rare that I've seen a more confused, garbled attempt at entertainment as The Avengers.

Based on the hit 60's TV show, The Avengers follows John Steed (Ralph Fiennes) and Dr. Emma Peel (Uma Thurman), two agents from the governmental association known as the Ministry, run by Mother (Jim Broadbent) and Father (Fiona Shaw). Apparently, the weather grid known as the Prospero Project has gone down and has been taken over by rich, nutty Sir August de Wynter (Sean Connery) who plans to take over London (or all of the UK, I'm not sure) by destroying it with weather.

This is all of the plot I could comprehend and pass on to you. It's never clear why, exactly, de Wynter, wants to do this, or how. By the film's conclusion, Steed and Peel find de Wynter and his weather contraption in their secret hideout (it's on an island in London I think, which is hard to imagine, but it's never really explained) and the action looks likes it was edited together with a cuisinart. Nothing flows together or makes much sense.

The director of this was Jeremiah Chechik, whom I defended when I reviewed his prior film Diabolique, believing that his clashes with Sharon Stone were the root of that film's problems. With The Avengers, he has no excuse at all. A lot of energy was used up trying to maintain a hip and retro look to the film which wears thin about ten minutes into it, and after about thirty minutes you realize that's all The Avengers has to offer.

The performances by Fiennes, Thurman, and Connery are adequate, but the ridiculously unfocused script undercuts them at every given opportunity. Connery, at one point, holds some sort of business meeting at a place called Wonderland Weather, where all of the board members are dressed up like giant day-glo teddy bears. Fiennes and Thurman are involved in a chase scene with large mechanical wasps equipped with machine guns (I won't even get into how bad the computer animation is here). There is even a subplot involving a cloned Emma Peel that's given about one line of explanation and then disregarded. I don't know who to blame for this complete botch job, where even the cataclysmic weather sequences in which London is beseiged with blizzards and twisters is slack and ininvolving.

When it was intially released in theatres, The Avengers was not screened for critics (an occurrence that was much rarer in 1998 than it is today), and it's easy to see why.  It's a sloppy movie made for a non-existent audience, and disavowed by all.