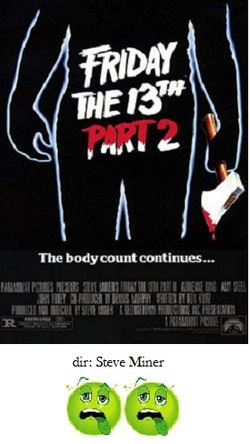 After the original Friday the 13th made a mint at the box-office, it's no wonder Paramount Pictures rushed a sequel into theatres in less than a year. And as the immortal Joe Bob Briggs said regarding all of the Friday the 13th movies, "They just made the same movie over and over again."

Yes, Friday the 13th Part 2 is very nearly a complete carbon copy of the original, with only very slight alterations. So, is it as good as the original? The answer to that question would be a resounding "No!".

Our film begins five years after the events of the first movie. Alice, the sole survivor is in her apartment and is having a nightmare, and then the audience is subjected to a replay of the first film's events (dead friends, wacko Mrs. Voorhees, decaptitation, boy in the lake etc.). Anyway, after taking a shower and being spooked by her cat, Alice opens the fridge and finds Mrs. Voorhees's rotting, decapitated head, whereapon a mad killer drives an icepick into her temple. Credits.

Now I'll attempt to maintain a timeline with these movies, but as you'll see, even the filmmakers barely bothered to let logic get in the way of a good slaughter. After the bloodshed at Camp Crystal Lake, the camp has been closed down permanently. However, in the most thinly veiled excuse to get more counselors ready for the chopping block, a DIFFERENT camp is being opened on the other side of the lake. Yeah, right. Did they think parents would actually send their kids to a camp that is nearby to the same camp that had 8 people butchered?

Whatever. The machete-fodder this go around are: Ginny- strong-willed heroine, Paul- head counselor and Ginny's beau, Terri- blank-eyed babe, Mark- counselor in a wheelchair, Sandra- big-boobed big-haired babe, Jeffrey- Sandra's blonde airhead boyfriend, Vicky- nice girl who likes Mark, and Scott- wanna-be stalker who likes Terri. There are about 15 other counselors at the camp; however, they all go into town for the night and escape death.

Let's see. Scott is caught in a rope-trap and has his neck slit, Terri is killed off-camera, Mark gets a machete in the face, Sandra and Jeffrey are spiked together with a spear while in bed, Vicky gets knifed in the stomach; there are a couple of extraneous deaths as well, such as a cop who chases the killer through the woods until he gets the claw-end of hammer to the back of the head, and 'Crazy Ralph', the doomsayer from the first movie, gets strangled with a chain.  Who is killing the counselors this time? Jason, of course. Yes, this movie is really the first one to feature the now well-known, unstoppable killer, Jason Voorhees. He wears a sack over his head throughout the movie (no hockey-mask just yet) and lives in a thrown-together shanty in the woods where he keeps his mom's head sitting on a make-shift altar.  Anyway, the finale of course has Jason going after Ginny and Paul; but of course, they kill him. Or did they? There is the requisite open ending which leaves everything open for another sequel, which the filmmakers were happy to oblige.

The main problem with Friday the 13th Part 2 is the characters in it. Sure, like all of these movies, the actors don't have 3 dimensional characters to portray, but at least they could have gotten some likable actors with some semblence of talent. Amy Steel, who plays Ginny, is really quite good and you can see why she got the lead (she, unlike her co-stars was actually heard from again and was able to sustain a career), the rest of the cast is just awful. Really awful. A bunch of loathesome so-called hot-babes and hunks who you really couldn't care less about.

The direction by Steve Miner is sluggish and poorly paced. It just takes so long for things to get going, and once they do, they happen so fast that the movie is basically over and done with. There is zero suspense, little atmosphere, and the ending, involving the reappearance of a dog at just the right (or wrong) time, is actually laughable. Also, the gore quotient this time is pretty subdued compared to the spurting veins of the original (but that was because cuts were demanded by the MPAA, and apparently there is an 'uncut' version of this and the original floating around), so it's not even good for a good gross-out or two.

Overall, Part 2 is among the more negligible of the sequels; not truly wretched and unwatchable, but just kinda limp. Things kept on pace with Part 3 but beginning with Part 4 the quality started taking a rapid nose-dive.