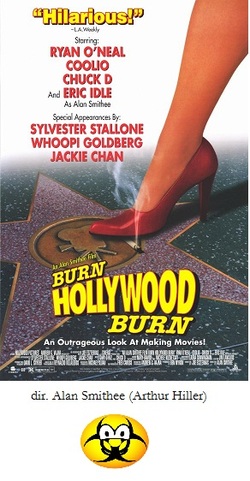 The movies often imitate life, and in a few rare instances life imitates the movies. The producers behind the wretched and wretchedly titled An Alan Smithee Film: Burn Hollywood Burn (or AASFBHB for short) probably thought they had hit the public-relations jackpot a when life imitated their film. In this case, that wasn't a good thing.

As some film aficionados may know, when a director or writer thinks their movies are so awful that they don't want credit for it or the studio has severely recut the film against their wishes, they decline to take credit for their work and use the pseudonym "Alan Smithee" instead. So if you see a movie directed or written by Alan Smithee you know it's going to suck big time. Well, in the case of AASFBHB, director Arthur Hiller was so appalled with the botched final cut by the producers and studio that, yes, he removed his name. So AASFBHB is ACTUALLY directed by Alan Smithee. Could you just die? The plot for this film  is about a director who hates the film he directed (in this case, a movie called Trio) so much that he does not want credit for it; however, the director's REAL name is Alan Smithee, so what on earth can he do? Ha ha ha.  Too clever.

Would it surprise you if I told you the screenwriter for this mess was none other than Joe Ezsterhas (master scribe of Basic Instinct, Jade and Showgirls)? It wouldn't? Well, needless to say, Big Joe kept his name in the credits. Lucky us.

Okay, on to the movie. AASFBHB stars Eric Idle as Alan Smithee who has directed a mega-budget summer flick, Trio, starring Whoopi Goldberg, Sylvester Stallone, and Jackie Chan. Idle is so appalled by the movie that he steals the print and disappears. Will producers Ryan O'Neal and Richard Jeni find Idle and get the movie back in order to foist it on the general public?  Or will Idle get to burn it?

How bad is AASFBHB? Well, aside from Spice World, it is probably the most incompetently made major studio film in recent memory. I could turn on my camcorder and film my cat barfing up hairballs and it would be more entertaining. The movie is filmed in a pseudo-documentary style with all of the characters talking to the screen and relating the whole tragic story. Every scene is comprised of a 1-2 minute mini-soliloquy with a bad punchline at the end. O'Neal at one point relates a little bit of plot exposition while receiving oral sex. There is also a really nauseating incest reference complete with father-daughter open-mouth kissing. Non-actor rappers Coolio and Chuck D. play the Brothers Brothers, hip new directors of such hits as You Ain’t No Brother and Word Up, Bitch!,  who become Idle's allies.

But It really isn't the people who can't act that sink this movie (Coolio, Chuck D., and even a cameo by Joe Ezsterhas himself), it's the ones who can that cause the most pain. Stars of Trio, Goldberg, Stallone and Chan actually show up and play themselves, sort of. Let's put it this way, Stallone is portraying Stallone as written by Ezsterhas. So is it really Stallone, or is it a Body Snatchers version of him?  It is Goldberg playing Goldberg as filtered through a bad screenwriter’s image of Goldberg, so it's really not Goldberg. See? No matter, they can't even play themselves convincingly whether or not it really is themselves.

This film is just so much nothingness. It would have been better had it been just told in a linear fashion with action and confrontations. But as it is, it's just a bunch of hammy actors yelling at the audience about what's going on, trying to drum up excitement and tension and laughs that don’t exist

I didn't even mention the weird sound effects and score that includes some sort of bizarre mantra to Michael Ovitz that comes and goes on the soundtrack at random. The editing is also pathetic; if you look at the backgrounds behind some of the talking actors, you'll notice the consistently poor (and annoying) jump-cutting. Dialogue is looped so shoddily that oftentimes there isn’t even any pretense of pretending to match the actors' lips.

Arthur Hiller is the former President of the Motion Picture Academy and the Director's Guild and I have to wonder what kind of drugs he was on to be talked into this crap by Eszterhas, but considering how lousy the vast majority of his films are that he DID take credit for, it might not have been much. No matter, this flick was barely released and received some of the most scathing reviews of many a year, so only an unlucky few even bothered to see it. I think there aren't many more nails that can by driven into Ezsterhas's coffin and even though Hiller can claims innocence for the finished product, I highly doubt anything watchable could ever have been cobbled together from the wreck that’s on display.