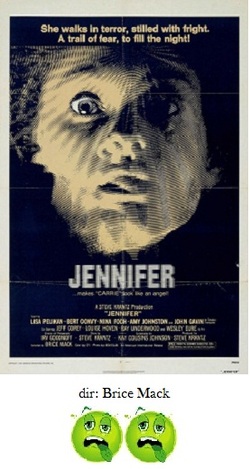 If you're looking for the single most blatant rip-off of Carrie, look no further than Jennifer.  But does that make it a terrible film?  Jennifer does have some good performances, a likable heroine, and a detestable villain, but its nearly identical plot and very weak climax undermine those good points.

Lisa Pelikan stars as Jennifer, a girl originally from the hills who is a scholarship student at a high-brow girl's school.  From here, just run down the Carrie formula checklist:  Parent that is a religious zealot?  Check.  Girl with supernatural power?  Check.  Girl terrorized and abused by her fellow students?  Check.  Indifferent school prinicpal?  Check.  One sympathetic teacher?  Check.  Revenge filled finale?  Check.

The formula is tweaked a little bit.  The parent, in this case, is the father (John Gavin).  Jennifer actually does have some friends and is only targeted by a few horrid classmates, led by the rich, spoiled Sandra (Amy Johnston), the daughter of a Senator, and Bert Convy has the thankless role of the sympathetic teacher.  And what about Jennifer's power?  She has the uncanny ability to summon and control snakes which her father claims is a gift from God, developed from childhood when she was a snake-handler at their church; however, she tries to repress the power.  Of course, Sandra humiliates her by posting nude photos of her around the school, accusing her of cheating on tests, strangles her favorite kitten and nearly drowns her in the pool.  Johnston makes her character a truly hateful villain, even turning on one of her friends, chunky Jane (Louise Hoven) who begins to have sympathy for Jennifer, by having her boyfriend rape her.

Of course, all we're really waiting for is for this group of rich b*tches and their lunkhead boyfriends to finally get their comeupance in a terrifying, or at least gleefully satisfying, finale.  Unfortunately, it's so much less than we hoped for.  As a final humiliation, Jennifer is kidnapped by the villains and driven to the top of a parking garage.  Then Sandra's evil boyfriend drives his car real fast around her... Yeah, I don't get it either.  Jennifer stands there, the car drives by, the other kids laugh, and well, it just happens to be the one thing that sends her over the edge.  For those hoping to see the snakes biting them and having them all die painfully, deserved deaths, you're out of luck.  Jennifer holds out fists full of snakes, snakes begin appearing and slithering and there are many closeups of various cast members screaming while snakes are wrapped around their necks.  There is a giant snake that appears briefly to bite off the head of Sandra's boyfriend and another that attacks her in her car, causing her to die in a fiery car crash (hmm...another similarity to Carrie), but, in the end, we learn no one else died.  Jennifer lives, at least.

Jennifer is a decent enough time-waster but there just should've been more to it.  The main reason to rip-off another more successful is to up the stakes in some way or offer up something more extreme, otherwise, why would anyone bother to watch it.  The only thing more extreme Jennifer has to offer is that of a truly wretched theme song ("Jennifer!  There's magic in your name..."), and that is far from enough.