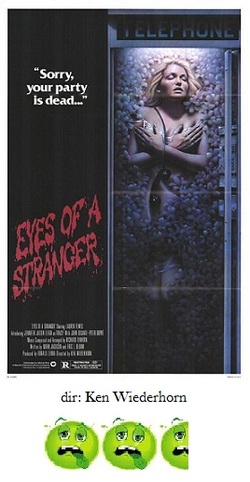 Eyes of a Stranger is a largely forgotten serial-killer thriller that boasts a pretty nasty voyeuristic streak, which leaves some good performances stranded in a quagmire of vicious violence and illogical plotting.

Lauren Tewes, from television's The Love Boat, made her big-screen bid for movie stardom playing a TV news anchorwoman who is determined to solve a string of rape-murders.  You see, there's this corpulent and greasy guy, who looks like Danny Aiello's younger brother, that stalks his victims, torments them with crank phone calls until he attacks, usually raping them while strangling them with a belt.  Oh, and he's one of Tewes's neighbors who, conveniently, has an apartment directly opposite of hers.  Cue up the Rear Window cliches.

To complicate matters further, in addition to her job and amateur sleuthing, Tewes is taking care of her younger sister (Jennifer Jason Leigh).  You see, when they were both children, Leigh was abducted and was left blind and deaf from the attack, and Tewes feels immense guilt over the incident.

Although, all of this material sounds promising, there's just this one, rather huge, problem.  The character that Tewes plays?  Probably one of the most wreckless, foolish, irresponsible and, well, not very bright, characters to ever grace a thriller of this stripe.  At any given moment, Tewes will do absolutely the wrong thing (or in many cases, not do the obvious, correct thing) that any suspense is rendered ineffectual.  There's a bloody shirt that could be used as evidence but Tewes ignores it.  Even though she's on TV every night, she thinks she can crank call the killer and he won't recognize her voice.  And at every opportunity, she leaves Leigh alone in the apartment knowing that the killer is very close by.  Does she ever call the cops?  Nope.  Really, the script ties itself into knots to make sure the story can continue, even though it should've ended at about he 15 minute mark.  All of this is a real shame, too, because Tewes is an effective actress and could've had a real film career, but she tied herself to Eyes of a Stranger and fell into obscurity.

Director Ken Wiederhorn also makes a mistake of trying to compete with the slasher films of the day.  The camera lingers on every brutal act by the killer in lurid detail (courtesy of makeup artist Tom Savini); we get a decapitation by meat cleaver, knives twisting in throats, endless strangulations, and the predictable assault of Leigh complete with her clothes being ripped off, her face being punched and her near fatal strangulation which is interrupted by one of the most ridiculous plot contrivances in film history.  Seriously, if I told you, you'd never believe this wasn't a comedy.

Eyes of a Stranger is simply too inconsequential and forgettable.  It's too violent and misogynistic for murder mystery fans, and it's lack of suspense and scares couldn't garner the horror crowd.  Understandably, it fell through the cracks; by trying to offer something for everyone, it catered to an audience that just didn't exist.