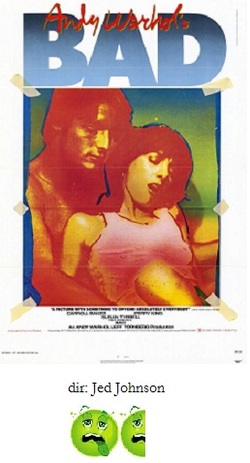 Here is probably the most watchable entry in the sub-genre of 70s trash movie that bears the Andy Warhol moniker. If you've actually been unfortunate to watch Andy Warhol's Flesh, Andy Warhol's Heat, or Andy Warhol's Frankenstein (aka Flesh For Frankenstein), you know that the above claim is not necessarily saying much.

Andy Warhol's Bad stars Carroll Baker who plays a seemingly innocuous beautician who also runs a hit-woman ring out of her home.  Also living in the house is Susan Tyrell, her very sad and pathetic sister-in-law, and a bevy of pretty young things who are Baker's assassins. This particular hit-woman business specializes in animals and children, so you can see that taste isn't really an issue with this movie.

Enter Perry King, a likeable actor with an uncanny knack for choosing awful material, (Mandingo, Class of 1984, The Choirboys), as Hazel's bad-boy nephew. He wants to move into the house and work for her, and against her better judgement (she prefers only women working for her because they are easier to control), she agrees. Putting another wrinkle into her life is a local detective who knows what her business really is, but is paid to keep quiet.

Anyway, the movie is basically about how King begins to disrupt the household and cause the unravelling and downfall of Baker. That's the plot in a nutshell, but it is really just a clothesline in which to hang much bizarreness.  And if you think the movie would actually hold back on actually showing the deaths and assassinations of animals and kids, as well as others, well, you'd think wrong.  A mechanic has a car dropped on top of him and then one of his fingers is amputated with a pair of wirecutters; a large woman who farts a lot hires a couple of the girls to run over a neighbor's dog because it barks too much; another woman wants them to off her toddler because he won't stop crying, but before they can arrive, the woman can't take it any more and tosses the child out of the window of her highrise apartment.  And of course, we get a nice shot of the kid plummeting to it's death where it finally splatters across the sidewalk, spraying blood and gore onto unsuspecting pedestrians.

Anyway, during all of this carnage King beds just about every girl in the house, even a pair of sisters (two really bad actresses not even worth mentioning by name) who have conversations like: Sister 1: "You're wearing my panties." Sister 2: "No, I'm not", then they try to slap one another. He also attempts to woo Tyrell in order to get an inside track to dethroning Baker.  Of course, everyhing goes horribly wrong for all involved. Most everyone dies. King bites it and Tyrell gets the hell out of dodge. The detective then tells Baker that she must give up one of her girls for arrest just to make it look like he is actually doing his job. She refuses. They argue. She calls him "n*gger". He drowns her in a sink full of dishwater. The end.

Yes, Andy Warhol's Bad IS bad. If you can stomach a lot of the blood though, you might actually enjoy this bizarre, tasteless gem.  It is akin to some of John Waters' earlier films, only without the hilarious, quotable dialogue.

The performances range from truly godawful (the sister assassins and just about every other supporting character) to inspired (Carroll Baker). Baker was once a hot property in Hollywood, after her notices and Oscar nomination in 1956 for Tennessee Williams' controversial Baby Doll, she was groomed, in the 1960s, to become a romantic leading lady; however, after several pricey bombs (Harlow, Sylvia) her star faded. The problem was that Baker, although blonde and beautiful, always came across as having a hardened, evil streak. She would have been better served playing villainesses or femme fatales. At least in Andy Warhol's Bad she gets the chance to really chew the scenery with gusto, and she does  a bangup job.  Susan Tyrell is probably TOO good as Mary, a sad and pathetic sap who is basically tormented and insulted throughout the whole movie. I have rarely felt so sorry for a movie character ever, but this one takes the cake. Perry King is fairly bland and only seems to be on hand solely to look pretty without a shirt on, which has been the story of his whole career.

So, invite a few friends over, get drunk, and hoot and holler at the insane absurdity that is Andy Warhol's Bad.