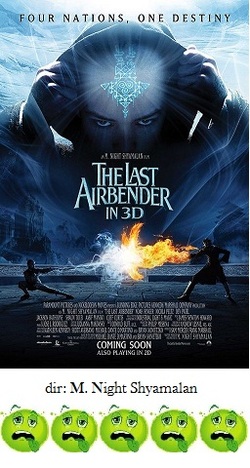 I have now watched The Last Airbender twice (I know, I'm insane) and I still have absolutely no idea what the hell all of this nonsense is about.  The only reason I haven't given this a worse rating is because it's still not as bad as M. Night Shyamalan's earlier dud, The Lady in the Water.

Based on the animated series Avatar: The Last Airbender, this live-action,  shorter-titled movie adaptation is about how the world is devised into four different, elemental-manipulating (or elemental-bending) sects: the firebenders, the waterbenders, the earthbenders and the airbenders.  There is also one special individual called the Avatar who can bend all four elements and keeps the world in a state of harmony.  Unfortunately, it's been 100 years since the Avatar vanished and the evil firebenders have taken control of the other areas and have wiped the airbenders out of existence.

All of the above is explained in a helpful bit of explanatory narration at the very beginning and this will be the only moment that will be interesting, entertaining or coherent.  As far as the movie itself goes, our heroes are a couple of waterbending teens who find a young boy buried in an orb of ice.  They free him and discover that he is Aang, "the last airbender", and he very well may be the Avatar.  The bulk of the movie is devoted to following these kids around the different lands, freeing the oppressed and waging war against the firebenders.  This sounds more interesting than it is.

The Last Airbender is filled with various people running around, doing cheeseball kung-fu hand moves and spitting fire, water, air and dirt at each other.  Other characters pop in and out and aren't developed and it still remains desperately unclear what purpose they serve.  A bigger problem than the underwritten characters is Shyamalan's godawful script that is so unbelievably lazy.  Well...unbelievably to those who hadn't suffered through The Lady in the Water.  The problem?  Shyamalan has no idea how to make his story progress or provide background, so he resorts to giving characters huge amounts of exposition to speak.  This ends up being the bulk of the entire screenplay.

Adding insult to injury is the terrible casting choices and the bad acting by all involved.  There was much controversy over the casting of Noah Ringer as Aang because he is white and the original, animated character was Asian.  They should've been more upset by the fact that Ringer can't act.  Although, to be fair, even talented performers would've been defeated by this dialogue.  Neither Nicola Peltz nor Jackson Rathbone, as the waterbender kids, fair any better.  The most laughable of all, though, is the casting of Dev Patel, star of Slumdog Millionaire, as the evil firebender prince, who proves to be the most ridiculously miscast screen villain since Jaye Davidson in Stargate.

After 4 critical and commercial failures in a row (although I enjoyed The Village and succumbed to the bizarre charms of The Happening), M. Night Shyamalan is in serious jeopardy of being sent down to the failed director scrapheap still populated by the likes of Elaine May (Ishtar), Michael Cimino (Heaven's Gate, The Sicillian) and Peter Bogdanovich (At Long Last Love, They All Laughed, Noises Off...).  Even though The Last Airbender's ending seems to suggest a possible sequel, I wouldn't hold my breath.