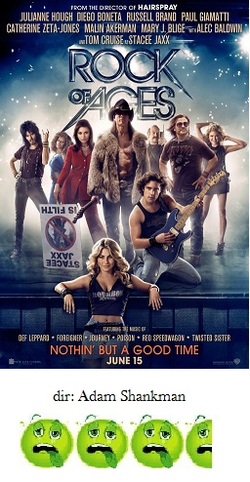 Creating an original musical around pre-existing, well-known songs is almost always a troublesome task.  Either the script ties itself in knots trying to make the songs seem to fit into a ridiculous plot (Sgt. Pepper's Lonely-Hearts Club Band), the songs are just used as forgettable window dressing (At Long Last Love) or they seem to serve no purpose whatsoever (Can't Stop the Music).  Rock of Ages does a little of all three.

Based on a minor stage hit, Rock of Ages tells the rather uninteresting story of two pretty airheads (Julianne Hough and Diego Boneta) as they pursue their dreams to be rock stars in Los Angeles circa 1987.  They meet, fall in love, fall out of love, succeed and fail all while belting cheeseball tunes from hair-metal bands and bombastic arena-rockers like Journey, Foreigner, Twisted Sister, Poison, REO Speedwagon, etc.  You know, songs the movie would have you believe everyone loves but which everyone most certainly does not.

Other characters include Alec Baldwin and Russell Brand as club owners who hire Hough and Boneta, Catherine Zeta-Jones as a politician's wife, obviously patterned after Tipper Gore, who wants to shut down the evils of rock-n-roll, Paul Giamatti as a sleazy agent and Tom Cruise as the past-his-prime, leather-pantsed, alcohol-addled rock god known as Stacee Jaxx.  As you can see, there was a plethora of talent on hand to really sell this material, but it all goes nowhere.

There are a couple of good moments: a mashup between Foreigner's "Juke Box Hero" and Joan Jett's "I Love Rock and Roll" is performed and edited with energy, and since it occurs very early in the film I held out some hope that the movie wouldn't suck as much as I expected it to.  Unfortunately, it all goes south.  Zeta-Jones's should've-been-a-show-stopping-performance of "Hit Me WIth Your Best Shot" visibly dies onscreen, and this coming from the Oscar-winning actress from Chicago is a really shocking tragedy; Hough's nasally and whiny voice grates during every one of her performances, Cruise's performance is entirely made up of brainless blathering while strutting around and having a very uncomfortable scene where he strips a magazine reporter who looks young enough to be his daughter and, finally, the lowest of low points from all of the low points in the movie year 2012 where Baldwin and Brand serenade one another while professing their repressed love.

The director of Rock of Ages is choreographer turned supreme hack Adam Shankman.  Shankman brought the world such brilliant turds as Cheaper by the Dozen 2, The Pacifier, Bringing Down the House, and The Wedding Planner before being called on to direct (and suck the complete life out of) the film version of the hit Broadway musical Hairspray, itself a musical adaptation of the John Waters classic 1988 comedy.  And like Hairspray, there is no originality, creativity or style to be seen.

The cast looks like they had fun making Rock of Ages but I wonder how they felt after seeing the final cut.  Zeta-Jones needed the work, Cruise needed to continue his image makeover and Hough and Boneta needed a career boost.  I don't think this movie helped.