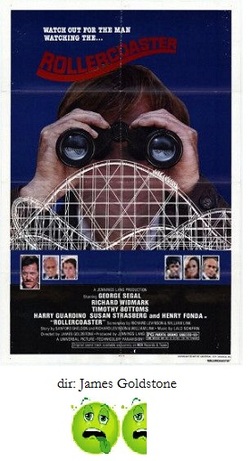 The plot idea of a terrorist that targets amusement park rides is terrifying, and it would make for a killer movie. Unfortunately, the one time Hollywood has attempted it, we were given the uber-boring Rollercoaster.

Rollercoaster starts off with a bang, literally. Mad bomber Timothy Bottoms has rigged a small explosive onto the track of a rollercoaster at a small theme park. The scene builds quite suspensefully as the track is blown out shortly before the coaster makes its fatal plummet. The coaster and its occupants are sent hurtling across the park causing some truly horrifying destruction. This scene is very unsettling, and sets the viewer up for a thrilling flick. Sadly, the rest of the film falls way, way, way short of being anything but a terminally dull ride.

George Segal stars as the head of a safety inspection team that handles amusement park rides. He is quite annoyed that the coaster he checked personally was the one sabotaged. We get lots of very lenghty scenes of "character development" regarding his attempts to quit smoking, and his relationship with his daughter (a very young Helen Hunt).

The next terrorist attack, a fire set at another amusement park coaster, curiously, occurs off screen. The fact that the filmmakers decided to pull its punches midway through the movie, when it should be building upon the suspense already established, is a bad sign indeed. In fact, every opportunity to really jack it up a few notches is avoided. Every time. For the rest of the movie.

Instead we get interminable scenes, like the one where Segal is threatened by Bottoms with another attack, this time at King's Dominion, unless he follows precise and pointless intructions (ripped off from Dirty Harry). This sends Segal on the breathtaking adventure of...walking around the park for several hours. Instructions like "Get on the chairlift. Go left until you see the Ferris Wheel. Sit down on the bench. Pick up the briefcase. Go to the souvenir stand. Buy a balloon." This goes on forever and ever, and the result? Nothing. A red herring.

The film ends with another bomb planted under the seat of a new mega-coaster that is being unveiled with lots of fanfare and media coverage (like all amusement park rides are). There is a huge crowd for the festivities, including a concert from the band known as Sparks.  I'm a huge fan of Sparks, but having their music playing over innumerable closeups of the bomb and shots of a desperate Segal trying to find it creates a truly bizarre effect.

Anyway, Segal finds the bomb and Bottoms is squashed by the coaster while attempting to plant another one on the tracks. The end.  What a waste of a good idea.