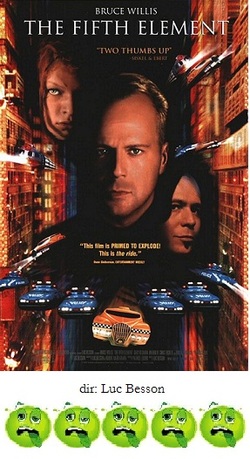 Ok, before the hate mail starts pouring in, let me just say that, yes, I know I'm in the minority on this one.  But I kid you not, watching this movie actually caused me physical pain.  All I can do is report how I felt...

Few films have gone up in flames right before my eyes quite so completely as this one, and like the equally horrible Dune before it, it somehow has a dedicated legion of followers who expound on its wonderfulness. But when put to task about plot elements, casting choices, and the like, all you'll get is a "well, I still liked it" response. If you paint a turd a rainbow of colors, sprinkle it with glitter and spritz it with eau de toilette..it's still a turd.  The Fifth Element was the long time dream project of French director Luc Besson, but it should have stayed that way.

Let's see if I can retell the annoyingly overbaked storyline. Beginning a long time ago (I think), several archaeologists in Egypt unlock some secret chamber of some king that foretells the coming together of the elements to save the universe. Suddenly a spaceship drops down and several giant crab-looking aliens arrive. Why? I'm not sure, because their strange dubbed over voices are completely incomprehensible.

Anyway, jump some centuries later. A giant meteor is hurtling towards earth. Enter futuristic cab-driver, a very distracted Bruce Willis. You see, a piece of one of the crab aliens hass reanimated into stunningly gorgeous Milla Jovovich, who babbles some incomprehensible language and is given nothing more than gauze bandages to wear, making sure we see her "talent". Anyway, Jovovich escapes and falls into Willis' cab. You see, she holds the key to the Fifth Element and how to save Earth. (again, I think)  Anyway, while all this is going on, they are being tracked by Gary Oldman (with one of the worst hairdos in screen history), who plays, natch, the villain.

The plot details became very muddled because I was checking my watch every five minutes or so and fending off a coma at the same time. Anyway, somehow, Willis and Jovovich wind up on some sort of space-cruiser which is being M.C.ed by the always annoying Chris Tucker. Ok, a word about Chris Tucker...why does he always sound like he has jumper cables hooked up to his nuts? I mean his screechy voice is enough to make my eardrums bleed, and everything he says in this movie is punctuated with a girlie scream. He's not funny, he's not entertaining....but somehow he has became enormously after this. Go figure.

Ok, Willis and Jovovich need a map, which is on some stolen stone tablets, to help lead them back to the pyramids so they can unlock the secret of the Fifth Element and stop the hurtling meteor (which up to this point has been completely forgotten by the script, or the filmmakers). They find the tablets imbedded in the flesh of a giant, blue, octopus-head opera singer (don't ask), then along with Tucker, hightail it to the pyramids.  It wouldn't be any surprise to say that, yes, they do save the day. But I won't spoil anything by actually telling you what the Fifth Element really is. Let's just say I wanted to jump from my seat and scream "Is that It?"

What a mess. Technicaly the movie looks great, but the sheer idiocy of the story, the infantile direction, and the pitiful performances (Bruce Willis tanks again), create a total mind-numbing effect. When it was all over I counted my blessings that I had, indeed, survived.

And if someone tells me I missed the point and need to see it again, I'll reply "Can I drink a glass of arsenic instead?"