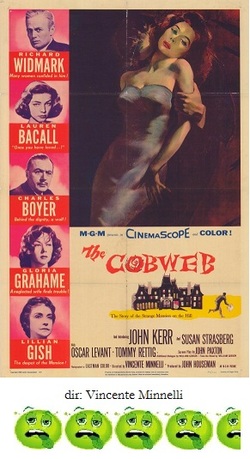 A wooden Richard Widmark stars as the pyschiatrist who is head of the clinic.  During a ’patient’s meeting’, he decides that the drapes that hang in the library need to be changed, so he develops a therapeutic project where all the patients can get together and design and sew them.  This decision sets in motion the rest of our story.  Yes...really.

A battle of wills occurs between Gloria Grahame, as Widmark’s wife, and the long-time business manager, played by Lillian Gish.  Grahame feels that Widmark is ignoring his family and spending too much time at the clinic; she even goes so far as to tell him a story about their daughter who was asked what she wanted to be when she grew up:  "Do you know what she said?  A patient!"

So to circumvent the patient’s therapy drapes, she hires a new designer and orders them herself.  Naturally they are of the tackiest looking fabric only available in the 1950’s.  When Gish finds out what Grahame has done, she is terribly offended, having been with the clinic for 15 years and designed the drapes herself, orders her own set.

Yes, as an audience we are being asked to lose ourselves into the terrific suspense of wondering which drapes will be made and hung first.  Needless to say, this is the very definition of underwhelming.  There are a couple of side plots such as very slight romance between two patients; a young man, played by John Kerr, who "fell apart" and a girl with "phobias".  Lauren Bacall is also on hand as the clinic’s 'art therapist' who is trapped between the 3 lead characters, not knowing whose drapes may or may not be made and/or hung.

The big emotional moment in the film has Grahame sneaking into the clinic in the middle of the night and hanging the new drapes up in the library.  Apparently, Kerr’s mental state was so fragile that when he walked into the library and saw the new drapes already hung, he had another breakdown and has run from the clinic.  When Widmark sees the new drapes he tears them down in a rage and he calls the search and rescue team to look for Kerr.  Anyway, needless to say, the decision over the drapes isn’t entirely resolved, but all the characters are a little sadder, but a little wiser for wear.

Few films in history have asked a movie-going public to get involved in something so inane as drapes.  This bizarre melodrama, directed by Vincente Minnelli, tries, but fails, to get anyone watching The Cobweb to become invested in the film’s outcome.  After all, it’s just about friggin’ drapes.

After 2 hours watching this whackjob of a film, I definitely had to quell my desire to tear down every set of drapes in the house and get some blinds.  Blinds definitely would have been a better decision for the folks in the clinic, but in this case, no drapes = no movie.  If only..