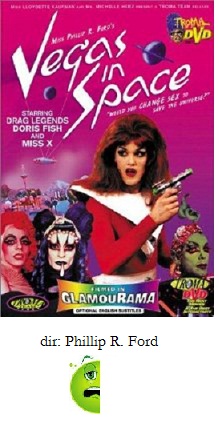 I guess even Troma Studios is capable of surprises. What with endless dreck like Sorority Babes in the Slimeball Bowl-o-Rama, Fertilize the Blaspheming Bombshell, and Tromeo and Juliet, I pretty much avoid Troma in every capacity, and after Sweet Savior (aka The Love-Thrill Murders), I learned that lesson, yet again, but Vegas in Space is somewhat different. It's actually, genuinely entertaining.

Don't get me wrong. There are still elements about it that do scream Troma, namely the zero budget, cheesy sets, and since this is an outer space movie, there are "special effects" like spaceships that are little toy rockets pulled by strings, space cities that are comprised of glass orbs with spinning towers made of rhinestone earrings, and paper cutout buildings.

Vegas in Space rises above these hurdles with a hilarious, campy screenplay, actors that rival John Waters's troupe for energy and gusto, and glaringly tacky costumes. Vegas in Space can best be described as The Adventures of Priscilla, Queen of the Desert meets Flash Gordon.

Let's see if I can explain the set up without getting confused. A group of male space rangers, led by Cpt. Dan Tracy (played by Doris Fish who is actually a man), are called for a mission to Vegas in Space on the planet Clitoris. Because no men are allowed there, they must take gender reversal pills, Dan Tracy is now Tracy Daniels, her two sidekicks (played by Lori Naslund and Ramona Fischer who are actually women who, at first, are playing men and then become women. Sort of a Victor/Victoria thing) are now Debbie and Sheila.

Masquerading as showgirls from Earth, they meet with the Empress Nueva Gabor (Ginger Quest, actually a man) who requests their assistance in recovering rare Girlinium gems that somehow are responsible for the stability of the planet, which is rocked periodically by earthquakes. Tracy Daniels hooks up with the police chief, Queen Veneer (Miss X, actually a.....never mind, you get the idea) to solve the mystery. But Vegas in Space really isn't about plot, it's about glamor. As Princess Angel states "Glamor first, glamor last, glamor always."

The screenplay is full of great lines, such as when Tracy asks Veneer about the difficulty of her job, Veneer states there are "only crimes of fashion, but enough to keep be offended...and busy." And the basic laws of police work include, "Never be seen in public wearing rollers, no flat shoes, and shoot on sight anyone wearing biege." There are also movie references dropped in here and there but you have to be on your toes to catch them: Nueva Gabor fusses at her maid and apologizes with "I'm not mad at you, I'm mad at the hors-d'oevres." Another great line occurs during a scene where Shiela, awaking from a terrible psychedelic nightmare by Tracy, who tells her "Calm down, you just had a bad dream sequence!"

There are also some other funny scenes like Veneer showing Tracy the color booster because "the atmosphere is so thin, it just won't hold color". The finale has Tracy and the girls performing their show is so cheesily done that even the filmmakers obviously knew this, so the camera cuts to the audience which sits in stunned silence rolling their eyes.

Vegas in Space is a lot of fun overall, if you can get past the extreme low budget effects and obvious attempts at camp and kitch.  It almost makes we want to don on a giant pink wig and a sequin leotard.