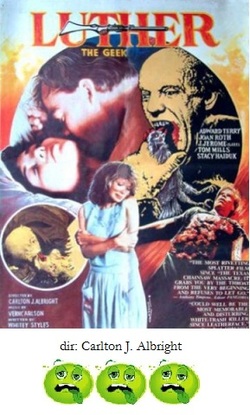 Sometimes you come across an unknown flick that is so odd you wonder why you'd never heard of it before. Luther the Geek fits that description quite nicely. It's not a great film mind you, but it does achieve some real loony highs.

The setup is thus. Many years ago a small boy goes to the circus to see the geek, you know, the guy in a cage who seems to be half animal that likes to bite the heads off live chickens. Anyway, the crowd of men watching the show somehow knock the boy to the ground and he hits his mouth and knocks his front teeth out. The kid then begins to go all cross-eyed and begins to grunt like the geek. It didn't take much to snap this kid's sanity now did it? To show that he is now one with the geek, he walks over to the cage and tastes some chicken blood. Mmmmm. And now the opening credits roll.

Jump some thirty-plus years later. Luther is in prison for some vicious murders and now is being paroled. I guess the parole board thought Luther was now a model citizen even though he hasn't spoken in years and still has his homemade, razor-sharp, steel teeth. On his first day out he visits a grocery store and eats some raw eggs.  Afterwards he sits on a bench next to a lady in terrible old-age makeup and then promptly tears her throat out with his choppers.

Luther is played by a creepy looking actor named Edward Terry in a nearly wordless performance. Oh, Luther does end up uttering a word (or sound is more like it) later in the film. But we'll get to that.  The rest of the flick has Luther stowing away in a shopper's car and being driven to her house (which is conveniently out in the middle of nowhere). How come, in horror movies, someone is able to hide in the back seat without being seen? If you think about it, it's impossible. While walking to the car from any direction it's quite obvious if someone is in the back seat. Am I right?

Luther traps the woman in her house, along with her daughter and her daughter's boyfriend. And begins to terrorize and stalk them in true horror movie fashion. But with a twist! While looking for potential victims, Luther clucks like a chicken. No kidding. The woman is under the bed, he enters the room, and suddenly "Cluck, cluck CLUCK!!" This is tremendously creepy and silly at the same time.  The gore quotient is fairly low for this type of film (except when the boyfriend is found with his innards turned to outards). And the acting (with a few exceptions) is actually not bad. Director Carlton J. Albright has a decent eye for setting up some pretty tense scenes, but the whole chicken thing is just too bizarre to be believed.

I wouldn't dream of spoiling the ending to Luther the Geek, but suffice it to say, the woman is able to survive once she learns to "communicate".