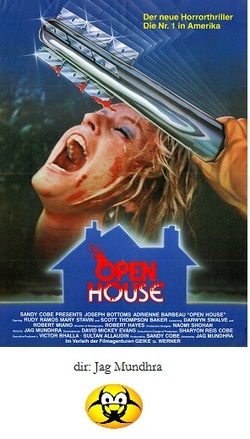 I'm sure 99% of horror fans missed this film in its initial theatrical and videostore run, and that's really the way it should remain.  Coming out at the very tail-end of the dying 80s slasher craze, some unlucky viewers may have been suckered in by the appearance of seemingly otherwise talented Adrienne Barbeau (The Fog, Creepshow, Swamp Thing) and Joseph Bottoms (TV's Celebrity and Santa Barbara).

How anyone involved in this garbage could look at the dailies and not call for the project to be immediately aborted is a great mystery.  Barbeau, to her credit, can barely contain her visible disdain for the movie, Bottoms, though, performs with all deadly seriousness; it's hard to say who comes out ahead.

The plot revolves around a mad killer who seems to have a grudge against real estate agents, and proceeds to chop, cut, choke and club as many of them as possible, with a few customers also being slain along the way.  Barbeau plays a very successful agent who may become another victim and Bottoms is a radio personality who suddenly gets phone calls from the killer himself.  All of this may sound good on paper but the results on screen are inept and ghastly.  Basically we get scene after scene of a pretty agent wandering around an empty house until she gets hacked, and since director Jag Mundhra (who lived to direct again) has no sense of pacing or tone, it's difficult to say whether any of this was meant to play for laughs (the shrill scene where an agent and a buyer are chased and hacked with a club lined with razorblades is so odd, you have to wonder how you're supposed to react).

If this mess weren't insufferable enough, when the killer is revealed, in the very protracted finale, the performance by Darwyn Swalve, as said killer, cranks the haminess up to 11.

Maybe it's too easy to pick on little throwaway bits of nothingness like Open House; after all, barely a handful of people even bothered with it.  I guess the purpose here is to warn those who, in the future, may stumble onto a copy of this in a discount bin somewhere and may think "Hey, it's only $1.99.  Why not?"  Trust me, you'll be thinking about that wasted $1.99 for many years to come.