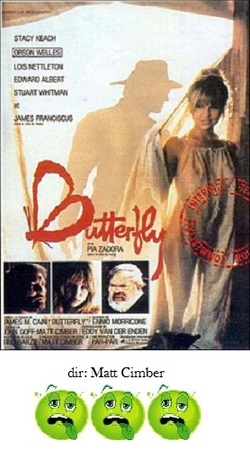 Butterfly is a silly potboiler remembered less as a movie and more for containing the role starlet Pia Zadora won a Golden Globe for as Best New Star, an invented category bought and paid for by her multi-millionaire mogul husband.  The Hollywood Foreign Press Association, the voting body who awards the Golden Globes, spent over a decade trying to live that award down and restore its cred.

Zadora, nobody's idea of a believable period-piece actress, stars as a poor white trash seductress who arrives in a tiny, 1930s dust-bowl community to be reunited with her estranged father, Stacy Keach.  He lives in a tiny shack near to the silver mine of which he has been hired to keep watch over.  Even though Butterfly is based on the novel by James M. Cain, there just isn't much story here.  Basically, the whole movie is this 'will they or won't they' dance of seduction where Zadora tries her hardest to bed Daddy and try to convince him to mine some silver for themselves.

There are a couple of wrinkles thrown in just to muddy the waters such as the arrival of Keach's ex-wife and new paramour for a visit, or the appearance of the man who fathered the baby that Zadora lost custody of.  Zadora, you see, prostituted herself in order to try and care for her child, which prompts the movie's funniest lines, "The money they gave me was good, the things I bought for my baby were good.  If that's bad, then I want to be bad!"  Luckily, it turns out, Keach really isn't Zadora's father so he can finally diddle her guilt-free.  He neglects to tell Zadora this, but since she's spent the first two-thirds of the movie trying to get into his pants even though she believed he was her father, it really doesn't make any difference.  The ludicrous finale involves an incest trial against Keach and Zadora that is presided over by an embarrassed-looking Orson Welles, where Keach, who can't actually prove he's not her father, pleads guilty so as to spare Zadora any jail time.

For all of the criticism lumped upon Zadora because of the Golden Globe fiasco, it must be admitted that her performance in Butterfly really isn't that bad.  If you'd like an idea of how bad it could've been, look no further than 1983's hilariously awful The Lonely Lady to see full-frontal Zadora wretchedness.  Truth be told, at least Zadora injects some energy into the movie compared to the nearly embalmed work by Stacey Keach.

Yes, Butterfly is irredeemably stupid, but at least it has some titilating moments and is never boring.  Ever since, Zadora has been viewed as a Hollywood joke, but one has to wonder that, if what happened at the Golden Globes hadn't happened, what kind of B-Movie queen she might've become.