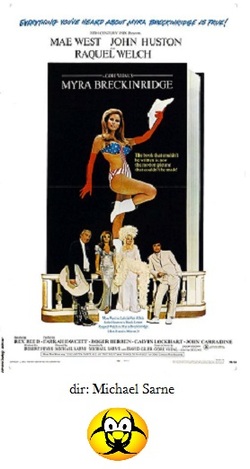 For however long unfilmable novels will be written, there will be someone out there who will try to film them.  Almost always, the result is an unwatchable disaster.  Myra Breckinridge, adapted from Gore Vidal's bizarre tribute to the battle of the sexes, gets the big screen treatment, and the result is dire.

Who is Myra Breckinridge?  Well, Myra is actually Myron Breckinridge, played by future film critic Rex Reed, who goes through with a sex-change operation and becomes Raquel Welch.  If you can grasp the concept of how Reed could possibly turn into Welch, then you've won half the battle.  Anyway, Welch (as Myra) arrives at the drama school of her/his uncle, played by John Huston.  Welch plans on getting her rightful inheritence all the while staging a one-tranny war to bring the sexes together.

This is all well and good, but for whatever reason, writer/director Michael Sarne decides to have many scenes with both Welch and Reed on screen together.  At many times, the Myron/Myra dynamic is destroyed as Reed talks over Welch or they finish each other's sentences.  More confusing still are the scenes where Reed interacts with young starlet Farrah Fawcett as if he were still a man.  Is this supposed to show Myra trying to get into Fawcett's panties, just without explicit lesbianism?  It's hard say.  The question is further muddied with the moment where Welch, Reed and Fawcett are all in a bed together.  Not only does Myra seduce Fawcett, but she sets her sights on hunky Roger Herren; however, that relationship ends when she ties Herren down and sodomizes him with a strap-on dildo.  This was Herren's only film credit, and can you blame him?

Director Sarne also peppers the entire film with random classic film clips as...commentary, maybe?  Not only are they a complete distraction, but it becomes clearer and clearer that they were inserted (probably in post-production when the studio had to salvage the disastrous footage and cobble something together that was releasable) as a cheap way to patch over plot holes and character development deficiencies

An aged Mae West is also on hand as a talent agent who specializes in auditioning young leading men (Tom Selleck appears very briefly as one of the 'auditioning' actors), but her character is pretty extraneous.  The only interesting thing about Myra Breckinridge is the behind the scenes story that West was so intimidated about Welch's status as a huge sex symbol she refused to be shown in the same shot with Welch.  There's a dinner scene where West and Welch are supposedly having a conversation, but the editing is so cut and paste that it's pretty clear neither actress was even being filmed with the other.

Myra Breckinridge is one of the more shockingly inept and amateurish films ever to be released by a major film studio.  It proves the saying that just because you can make the movie doesn't mean you should make the movie.