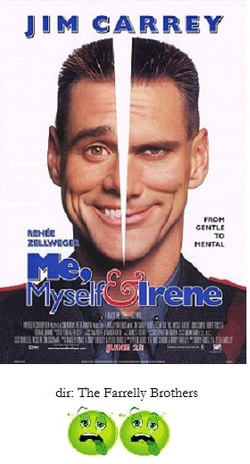 I admit it, I'm a Jim Carrey fan.  I also admit being a Farrelly Brothers fan; I absolutely love Kingpin and There's Something About Mary. With that said I can, without bias, say Me, Myself & Irene is a waste of time, talent and energy.

So, what happened? It's very hard to say, it seems as if all of the necessary ingredients are there to make a tasty, tacky, but hilarious comedy, but somehow nothing mixes very well. The tone of the whole enterprise is off from minute one.

Jim Carrey is Charlie, a Rhode Island cop who is a spineless wimp. His wife leaves him for an African-American, limousine-driving, Mensa-member dwarf, and the local townsfolk walk all over him. Finally, he has had enough and develops a second-personality named Hank who is a tough-talking, violent creep. To get Charlie/Hank out of his hair, the sheriff decides to have him escort pretty, young Irene, played by Renee Zellwegger, to another state where she is wanted by police for questioning.

The film seems like it might become some sort of demented road-movie, but there is a weirdly intrusive and unnecessary plot involving the EPA and payoffs to the FBI that Irene is a witness to. So every once in awhile an extraneous character pops up to kidnap/kill Irene and Charlie must "turn into" Hank to rescue her.  And that's basically the story. The characters are even less appealing. Zellwegger plays Renee as either conveniently perplexed or whiny, Carrey as Charlie has the personality of a dishcloth, and Carrey as Hank is cruel and sadistic. I hated everybody. One big reason Kingpin and There's Something About Mary worked is because the characters were likable and you actually cared about their fates. You WANTED Woody Harrelson to win the bowling tournament and you WANTED Ben Stiller to end up with Cameron Diaz. In this movie, you couldn't care less if Zellwegger is offed by the baddies or if she and Carrey fall for each other.

I almost forgot to mention the obnoxious voice-over narration that makes everything sound like an extra long "Dukes of Hazzard" episode:

"Well Hank finally got the girl and defeated Boss Hog...er...I mean the EPA!"

Just kidding, but you know what I mean.