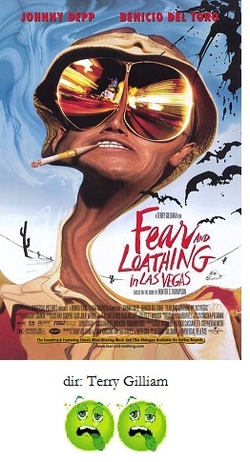 Two things should have alerted the filmmakers that Fear and Loathing in Las Vegas could not be made into a good film. Firstly, if a book is considered unfilmable, don't bother trying. Secondly, a film about journalist Hunter S. Thompson is always a bad idea because his persona is so uncinematic (images of Bill Murray as Thompson in 1980's Where the Buffalo Roam should give one pause to ever trying to do it again.) But no, they went ahead and made Fear and Loathing and the result is exactly what should have been expected.

The plot, based on Thompson's book, deals with his trip to Las Vegas along with his lawyer friend, Dr.Gonzo, to cover a car race and a D.A. convention, while consuming every drug known to man. To say the story is a bit thin, is an understatement. I still went into this flick with high hopes, after all, it stars Johnny Depp, one of the best actors of his generation, as Thompson, and it was directed by Terry Gilliam, who, in my opinion, hasn't done a bad movie (until this one, that is). But the result is one long, endless, slog
of drug-taking and lots and lots of vomit.

Thompson and Gonzo arrive in Vegas and immediately drop acid (or peyote, I really can't remember the exact narcotic) and begin to have hallucinations. The patterns in a carpet begin to come to life and crawl up a man's leg, the hotel clerk's face distorts, and dinosaurs are seen patronizing the bar. Now, these images are kind of cool and surreal, but since the film is nearly 2 hours worth of this, I felt like I had been beaten in the head.  Between binges of acid, pot, cocaine, alcohol, and ether, the film stops to provide several scenes of Gonzo (played by a weighty Benicio Del Toro) blowing chunks. Yum. Once would have been plenty, but no, many scenes are devoted to colorful regurgitation.

The performances by Depp and Del Toro are okay I guess. It's really hard to say. Depp talks in a quick-clipped, low, monotone and Del Toro's voice is slurred like he's talking through a mouthful of pudding. Thus, 99% of the dialogue is virtually incomprehensible. There are a couple of cameos by Tobey Maguire and Christina Ricci, but they really don't have characters to play, they just function as witnesses to Thompson and Gonzo's obnoxious behavior.

On the whole, Fear and Loathing in Las Vegas is a film that is not  unlike watching a really drunk guy at a party, while everyone else is sober. It's just not that funny unless you are plastered yourself.  I don't know whether or not to foist any blame on Terry Gilliam. The original director, Alex Cox, was hastily fired (he still retained a screenwriting credit)  and Gilliam was brought in to save the project. This could be a clue. Cox, a once cool director (Repo Man and Sid and Nancy), has been dwindling in director jail for some time after such pricey debacles as Straight to Hell and Walker. Nowadays, if you see Cox's name involved with a movie, just turn away and run as fast as you can. Maybe Cox's hackwork just couldn't be saved by Gilliam, or maybe it was just a doomed venture from the start. Who could say.

If you want to drop some acid or eat a few peyote buttons, Fear and Loathing in Las Vegas might actually be an enjoyable, trippy experience. Otherwise, you really will be wasting your time.