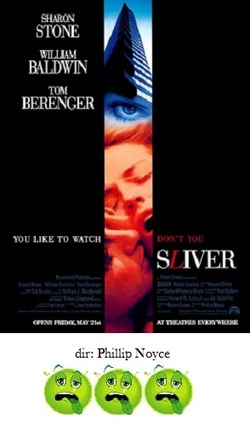 A Golden Rule of moviemaking states that if a formula is a success, Hollywood is destined to repeat it, ad nauseum, until it fails. Luckily the formula of a Sharon Stone sex-laden thriller written by Joe Eszterhas lasted for exactly two movies. Basic Instinct was the hit that set the ball rolling,
Sliver was the flop follow-up that stopped that ball dead in its tracks.

Shlockmeister Eszterhas adapted the Ira Levin novel about hot-to-trot divorcee (Stone) who moves into a fancy high-rise apartment building that several unsolved murders have taken place. As the events of the movie unfold, however, it becomes more and more obvious that Eszterhas wasn't all that interested in the mystery aspects of the story, giving little to no thought or care to them, and was more concerned with finding new and creative ways to separate Stone from her clothing.

Anyway, Stone moves in and is immediately beseiged by two gentlemen callers: William Baldwin, the rich apartment-owner and has-been author Tom Berenger. With these three deadweights as the main characters, you can almost hear the sucking sound of talent and energy being drained right out of the movie. Stone, Baldwin, and Berenger act as if they were all slipped quaaludes on the set each day.  There are other, more colorful and energetic, supporting members of the cast, but of course, they wind up dead.

Stone and Baldwin have a hot and heavy affair and then he shows her his big secret. No, not that (such dirty minds you have), but a room with hundreds of television monitors where Baldwin can spy on all of the residents. At first, Stone is appalled, I mean really pissed off, but after about, oh, ten seconds of moral contemplation, decides it's cool to be a voyeur and joins in the fun. All the while, residents are being knocked off at regular intervals.   By the film's end we are led to believe that one of the two guys is the killer, then we are led to believe that the other guy is the killer, but it's revealed that, yes, it was the first one all along. The ending feels oddly tacked on though, and since Sliver went through many, many test screenings to get the right ending, it's no wonder. Stranger still, one of the original endings had a stunt that involved a helicopter flying into a volcano. I kid you not. The mind reels at how that would have ANYTHING to do with the story.

The sole clever touch is from director Philip Noyce. Berenger shows Stone one of his novels which has a dust-jacket showing a picture from Noyce's earlier, and infinitely better, film Dead Calm. I don't know how many people would get this though.  Luckily, Noyce was able to put Sliver behind him, going on to direct such terrific films as The Quiet American and Rabbit-Proof Fence.

Silly and lightweight, Sliver really is a negligible film. Stone's last line of dialogue clearly states what the audience must be thinking: "Get a life."  Indeed.