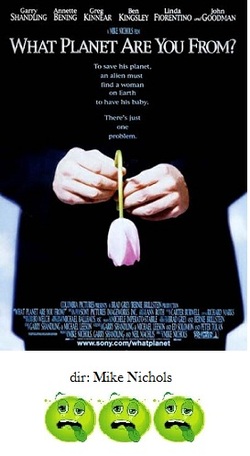 The only conclusion I can come to as to why such a flimsy and...er...flaccid comedy, as What Planet Are You From? most certainly is, was ever viewed as a filmable concept, let alone being financed and garnering a top-notch cast, has to be due to the clout of A-list director Mike Nichols.

Nichols (a veeery far cry from Who's Afraid of Virginia Woolf?, The Graduate, Silkwood and Working Girl) got such actors as Ben Kingsley, Annette Bening, Gary Shandling and Linda Fiorentino to star in what amounts to a 105 minute penis joke.  Shandling also must shoulder some of the blame himself since he is one of the four (four??) credited screenwriters that came up with it.

What Planet Are You From? is about a race of alien beings on another planet, led by leader Kingsley, who can no longer reproduce, so it is up to alien Shandling to be sent down to Earth in order to father a baby and keep his race from going into extinction.  Oh, and since these aliens have atrophied penises, Shandling is given one in which to procreate.  The only problem is that, whenever Shandling is aroused, a mechanical whirring sound akin to a blender starts emanating from his pants.  And with that, all of the comedic inspiration for this entire movie is exhausted.  Needless to say, scenes involving beautiful women noticing and commenting on the sound of Shandling's appendage is repeated ad nauseum.  Also adding unnecessary padding to an already threadbare idea is the subplot involving P.I. John Goodman investigating Shandling's arrival and being the only human who knows of his true identity.  Unnecessary in that Goodman's storyline goes nowhere and amounts to nothing.

Eventually, Shandling gets into a hasty marriage with Bening who eventually becomes pregnant, and, yes, a baby is born.  At this point, What Planet Are You From? switches gears and tries to be all hearfelt and schmaltzy with Shandling deciding he wants to stay on Earth and now believes in love and wants to stay with all of his newfound human friends.  It almost makes you wish for more scenes involving his penis/cuisinart.

For Mike Nichols, What Planet Are You From? can just be viewed upon as a strange hiccup in an otherwise respectable career.  After this turkey lost over $40 million dollars, Nichols bounced back quite nicely with Closer, Charlie Wilson's War and the award-winning miniseries Angels in America.  For Shandling, he's still looking for that one project that will make him more than just a respected television actor and comedian, because this attempt is best just forgotten.